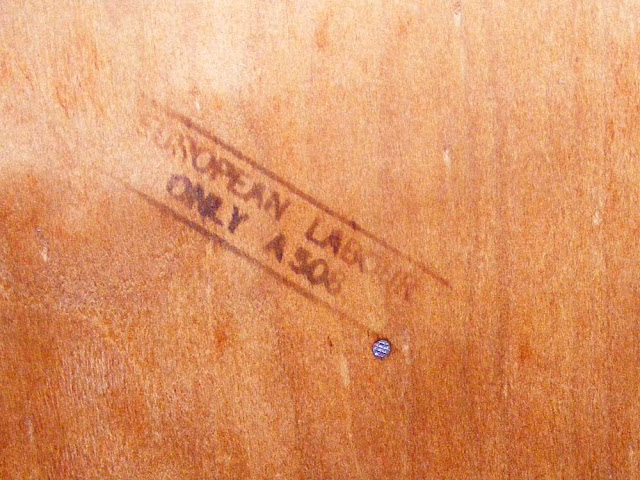 While we were shuffling furniture about the other day Simon took the opportunity to photograph the stamp on the back of one of his wardrobes. This 'European Labour Only' mark is a feature of furniture made in Australia between 1896 and 1963. It means that the piece was made in a factory which only employed Australians of white European backgrounds.

It was a legal requirement to distinguish between furniture made by white workers and furniture made by Chinese workers, which was stamped 'Asiatic Labour Only' (or in the case where a factory employed both, or some Pacific Islanders, 'European and other labour'). The original legislation was enacted to try to combat the problem of sweated labour where Chinese workers were exploited, working long hours for little money. Their jobs were not secure and workplaces often unsafe.

It soon got twisted into outright racism though, with trade unions failing to support Chinese workers wanting reforms and improved conditions and claims that the furniture made by Chinese Australian labour was inferior. As a result the furniture industry labelling requirements were closely associated with the notorious White Australia Policy (as it is colloquially known -- officially it was the Immigration Restriction Act) of the first half of the 20th century. White trade union workers were threatened by the Chinese output as they were more productive and undercut the European Australian made furniture prices. At times there was a lot of anti-Chinese sentiment. Eventually regulation to control hours worked were introduced and the Chinese businesses lost their advantage.

Just like today though, furniture manufacturers took advantage of obscure supply chains, and the European Labour Only stamp doesn't always mean the product was manufactured from start to finish by white Australians. Even whilst being encouraged to 'buy Australian' consumers were being duped about the real origins of some products or lines. Sound familiar?...

On Sundays our posts have an Australian theme. To read others, go to the index item Australia on the right side bar and click on it.

Sadly there will always be those who try to cheat people out of their hard earned cash by selling fake or shoddy goods, and those who will buy anything as long as it's cheap enough, not giving a damn for how it was produced.
I was reminded of this when seeing people buy fake designer handbags and Nike trainers from black youths selling them from a sheet spread out on the pavement yesterday. Some of the youths had cords tied to the corners of the sheets so they could pull them up and run away if the police arrived.

In certain places these guys are mostly refugees, with no other source of income. They've paid for the goods (presumably usually fake) from wholesalers and need to sell them. It's a more complicated ethical situation than it first appears.

Some damn fool in our government thought to enliven the Tory party conference by suggesting that employers ought to publish the proportion of foreign workers they employ, with much the same intentions (and likely actual consequences, as people immediately rushed to point out). The way things are drifting, I wouldn't be surprised to see it here.