So far as I know the 19th century French painter Gustave Courbet (1819 - 1877) never visited Loches, but he did strongly influence Emmanuel Lansyer, whose house is by the Porte Royale on the citadel in Loches. Lansyer's house is now a museum and they currently (until 1 November) have an exhibition exploring the connections between Lansyer and Courbet, as well as providing a potted history of Courbet's life and career.

Courbet turns out to fall into the 'charismatic but infuriating' mould of artists. He is not an artist who hitherto had made much impact on me, despite the fact that I must have seen his most confronting work (l'Origine du Monde - do not click on this link if graphic nudity offends you) and the enormous painting which made his reputation (A Burial at Ornans), both at the Orsay, and I would have seen Le Sommeil at the Petit Palais too. I don't remember any of these works (!) and had no idea he had been quite so widely influential and political.


Etchings of some of Courbet's works.
The woman in the centre was described by critics who couldn't cope with an unidealised nude as having une croupe comme un percheron (a backside like a carthorse). 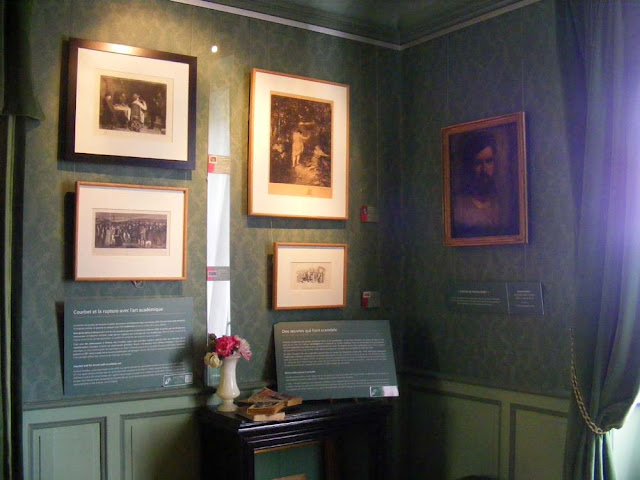 So, whilst I didn't fall in love with the man's landscapes, which were what was on show in Loches, I did appreciate learning more about him in relation to his times and mores. He is a painter who today we look at and simply don't realise how controversial and ground-breaking his realist style was from the very beginning. His insistence on painting ordinary people doing normal things was seen as shocking and tasteless.


The egotistical Courbet was ripe for caricature. 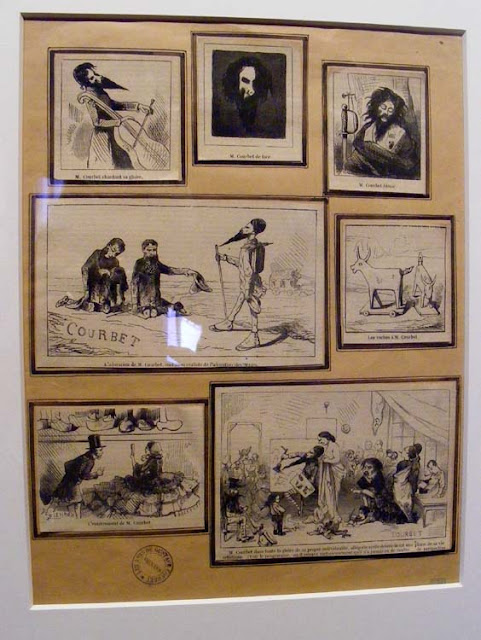 A Burial at Ornans, for example, showed the townsfolk of his birthplace attending the funeral of his great-uncle. Like people in a respectful crowd do, they are just standing there. None of them are making histrionic gestures to demostrate the depth of their grief. So not in the 19th century fashion!  And the size of the painting, which is enormous, was seen as inappropriate when used to portray simple peasants rather than the great events of history. Courbet was completely anti history painting at a time when it was considered by the establishment to be the pinnacle of the painter's art.


A nod to Courbet's chaotic and short-lived teaching studio. 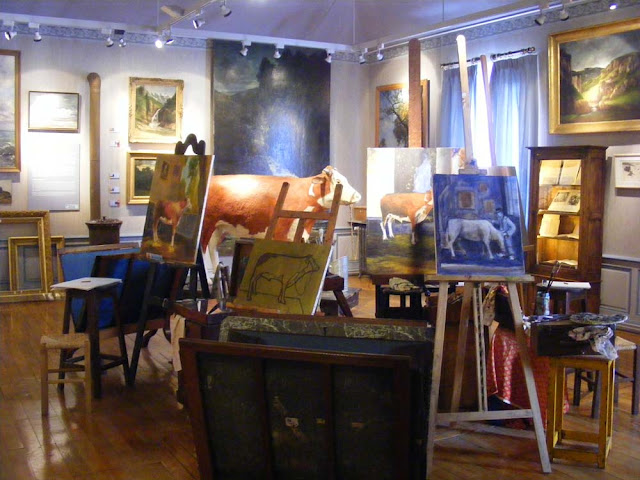 After a career shocking the art establishment and emboldening the next generation of painters to do their own thing, poor Courbet got tangled up in the Paris Commune and ended his days in poverty in Switzerland. After the Commune was broken up Courbet was held to be responsible for the demolition of the Vendôme Column and told he had to pay to have it re-erected. He fled to Switzerland to escape bankruptcy and died just as the first payment was due.