My Back Pages: Simon's T-Shirt Archive (3)

This T-shirt dates from 1998, and was bought at the Kennedy Center for Performing Arts on Memorial Day.

AmJam was a celebration of American music lasting the whole week-end, but I was only there for the Sunday day. I still managed to see Los Lobos, Arlo Guthrie, Sweet Honey in the Rock (I had to miss the Staples Singers to do so :(  ), and Eddie Palmieri. The full line up for the three days is here. I was excited (almost beyond belief) that we parked in the Watergate Building, a place mythical in my childhood. 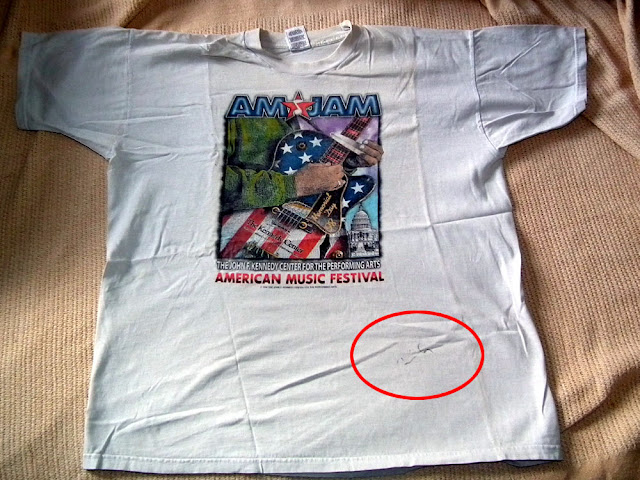 The dirty mark circled in red is Robert Cray's signature. Somewhere, I also have one of his guitar pics (plectrum...) but at the moment it is still in with stuff. I took the photo below on the same day. 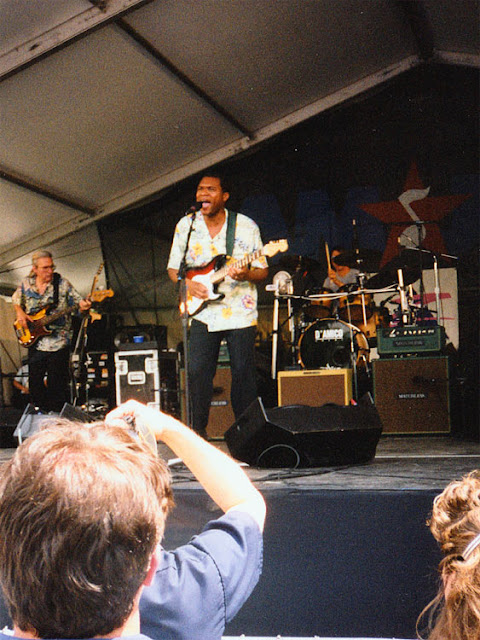 Loire Valley Nature: A new entry for Daubenton's Bat Myotis daubentonii has been added. Look out for their little pink noses if you want to identify them.

A photo has been added to the entry for Bat Surveying in Indre et Loire, in case you were wondering what the bats had for dinner.

Au jardin hier: The fog didn't lift until after lunch so I waited until 4pm to go down to the orchard. We've obviously had another frost in the last few days as the paulownia and the Chasselas grape vines have been frosted.

I picked the last of the Black Hamburg grapes and I think I've got most of the walnuts. They clearly have nuts inside as two of them have been opened on the tree by some creature. I've never had the walnuts eaten on the tree before as far as I know. I picked up about half a bucket of perfectly useable windfall apples, planted half a row of leeks and sowed some crimson clover.

The first of next year's orchid leaf rosettes has appeared.
Susan

A la cuisine hier: Supermarket potato and leek soup with some roquefort cheese crumbled on top in a quite successful attempt to customise and improve it, followed by a homegrown reine de reinette apple.

A grilled pork chop served with mashed potato and steamed carrots. Dessert was a slice of broyé aux framboises (a sort of shortbread and raspberry jam sandwich) with whipped coconut cream. I bought the broyé at the boulangerie and told Sophie behind the counter that I would be serving it with the coconut cream. She agreed that une note de coco would be perfect. She also had a bag of ten of yesterday's croissants for sale for €4.50 -- a total bargain. I said I would make croissants aux amandes with them. She suggested jambon fromage would be good too and made sure I knew they could be frozen.

I laboriously peeled a kilo of little onions and put them in brine, the first step of pickling them. The onions are half my own homegrown, half from the Aged One.
Susan

It's great here in sunny Lancashire AND we have had NO frost as yet!!

Just been to the new optician in Liggy... very nice and thorough... the boulangerie by the church was offering "pain grillée" from yesterday's bread... it is marvellous...and very light. Much nicer than the commercial 'toasts'... not as heavy and, I suspect, oven-baked.
We went into the boulangerie to buy something to settle our stomachs after receiving the devis!! Fait maison tartes aux fraises.... yum!!

My digestive system would be extremely dissatisfied by all the fat in your 'satisfactory lunch'.

Do you mean bread pudding (soaked bread mixed with sugar, dried fruit, spices and baked like a cake) or bread and butter pudding (slices of buttered bread baked in a custard)? I think I've tried croissants once with b&b pud, but we prefer panettone or brioche. The other day Sophie had a 'yesterday's' apricot loaf for a euro and Simon made b&b pudding out of it. Bread pudding is more his thing too, and I suspect ordinary bread is best for it.

In the U.S. I'd never heard of "bread and butter pudding. We just have bread pudding, and there are many different recipes.

In British English there is a clear and I think widely understood distinction between the two sorts. Jocelyn's from Canada, so she probably speaks a hybrid English, like I do :-)