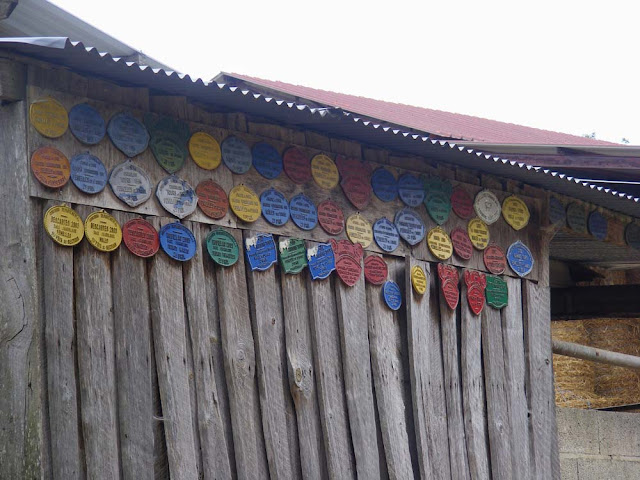 On a walk in the Claise valley between Chaumussay and Preuilly I encountered this shed at the gateway of a farm. The metal plaques are prizes won for Charolais cattle at agricultural shows at the département and inter-département level for the decade up to 2004. Yellow is a first prize, blue is a second prize and green is a third prize. Red appears to be a tied or shared prize.

The big creamy white Charolais breed is the most widely raised beef breed in France, but it is not as common as the Limousin breed in the Touraine. Curiously, although the breeds are Charolais and Limousin in English, because the word race (breed) is feminine in French, the breeds are called Charolaise and Limousine in France. Due to that gender agreement requirement in French you would say la viande charolaise (Charolais meat), but le boeuf charolais (Charolais beef).

OK! What is the white one? Tee-hee!
I think that this is a wonderful display of talent.... you next "mission imposible"....
probably more important than the white plaque....
is to find the butcher[s], locally, that sell the meat from here....
then we can all see if the prizes were worth it.
I think the semi-rectangular plaques, with the white bull on the top left, are particularly nice.

I reckon the white one is one of the other colours that has lost its paint.

The butcher in Preuilly sells Limousin and Blonde d'Aquitaine which come from a finisher and abbatoir at Chateauroux. I don't know about the other local butchers' suppliers.

Thanks for letting us know where to get his beef... we must go and get some.
The reason I asked about the white plaque... which still has a gloss, so I don't think it is sans paint... is that it is a totaly different design to all the others...

Err...I didn't let you know. I've no idea where the prizewinning guy sells his Charolais or what his name is, or even if he still has cattle on the farm (although I think he does). My comment about the Preuilly butcher was to indicate he definitely doesn't have the guy in the post's beef.