My Back Pages: Simon's T-Shirt Archive (1)

I own a lot of t-shirts but many of them are, these days, of sentimental value only. When we have finished(!!) the graineterie they will form part of the decor of my office, but until then they are sitting in the recently moved wardrobe.

As I was folding them I thought about why these are the t-shirts I have kept, and the stories behind them. 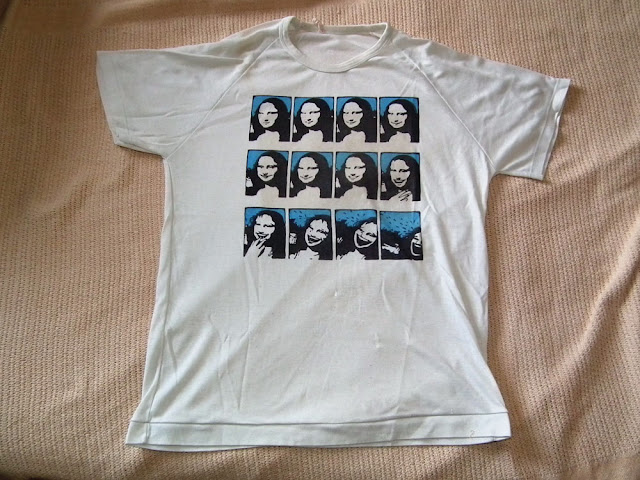 The first t-shirt was screen printed by a friend in Canberra, Peter "Panda" McDonald. I met Peter Panda when playing in the pit orchestra for a pantomine, but I will let him tell his own story:

I arrived in Canberra in March 1984, as a graduate recruit to the Public Service (naturally). Later that year I saw an audition ad for Aladdin at the Repertory , and thought that being in a pantomime might be fun. The phone conversation went something like this:

Me: What sort of people are you looking for ?
Rep Person: People who can do anything really
Me: Ummm, errr, I can play the Tuba
Rep Person: That could be good
Me: Oh, err, Ok I’d like to book an audition then.

So I turned up to Theatre 3 one fine Saturday morning with no idea as to what to expect, and with no idea of the reputation or standard of Rep productions. I sang a totally unprepared song, and read some lines. I was immediately considered for the non-speaking role of the Panda Bear. The stage manager, with what turned out to be remarkable foresight, suggested the Panda could play the Tuba, and so I found myself in a show. (from Rhubarb, the Canberra Rep Newsletter, June 2005)

Peter also had talents as a designer and cartoonist, and would produce short runs of t-shirts for his friends. This was one of his classics, probably dating from 1985.

I only have one that I've kept from my visit to the Kennedy Space Centre as it was called back then!!! It does NOT fit me now!!!

Fantastic! I look forward to more posts in this series. Unfortunately just about everything I wore in 1984 wouldn't fit. Tim's clothes would!

I've never heard of a sentimental T-shirt collection but it sounds fun. I love the fact that you were chosen to be a tuba-playing Panda bear.