The End of the Line?

The railway line from Port-de-Piles to Tournon-Saint-Martin was opened to traffic in 1885-1886, reaching Preuilly sur Claise on 16 May 1886, and closing to passenger traffic on 27 June 1940. In 2005, just after the line was refurbished, it was closed to freight traffic as well. Prior to that it had been used to transport kaolin from le Blanc to Descartes, with two trains a day using the line in 1992.

The station in Preuilly was recently for sale, but whether it sold or the online advert has just been withdrawn (which is quite common) I don't know. We have heard rumours that the line has been delisted recently, which would explain why at Humeau and along the road between Humeau and Chaumussay the Stop signs at the level crossings have been removed, and the railway line bitumened over when the road was resurfaced. 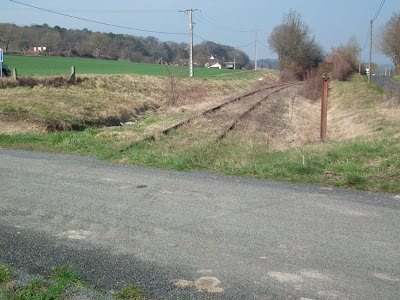 This will come as a great disappointment to CFTST - Le Chemin de Fer Touristique Sud Touraine, who were hoping to open at least a part of the line for a tourist train. It also comes as a disappointment to me, because I would love a tourist train in the area - especially as the line between Le Grand Pressigny and Tournon is particularly scenic, following the Claise river for quite some distance before diving off through forest between Bossay sur Claise and Tournan. 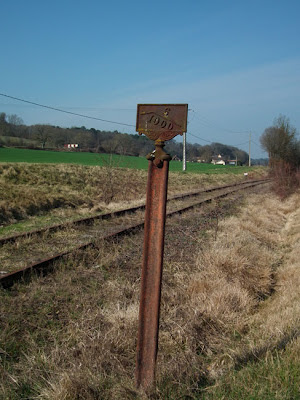 I hope this doesn't mean the end of the railway, but I fear it might.

The signs will get nicked!
Shame... they are also part of a nation's history.

We agree, its such a shame. The same thing with the railway in Richelieu and up to Chinon. It would make a great tourist line... BUT would it get used, probably not.

Maybe a voie vert is in the offing. That would probably be much more used than a tourist train.

if the line were to be opened up where would the brocante at Chaumussay be held? ;o)

It's probably easier to re-site a brocante than it is a railway!