The big white balls of silk you see decorating the sunny side of pine trees, from the south of France to Paris, are not leftover Christmas baubles. They are the communal 'nests' of caterpillars who nightly devour the pine needles, following each other in single file along a silk track. You need to be careful of them and observe from afar, as they are very irritant. The older caterpillars are capable of releasing their irritant hairs into the air around them, and the hairs persist a long time in abandoned nests.

Each hair is a tiny harpoon which contains an extremely irritant protein called thaumetopoeine. If you scratch or rub the hairs into your skin they release the substance. Often the effect is mild and passes quickly (especially if you take a hot shower) but it can be serious if you get the hairs in your eye, breath them in, are allergic or are repeatedly exposed. For serious exposure you should consult a doctor. Horses and dogs are particularly sensitive to thaumetopoeine and you need to be on the alert for any signs of distress in your pets. Also be careful handling your pets, as they can collect the caterpillar hairs in their own coats, bringing them inside and transferring them to your hands and arms if you pick the animals up or pat them.

Certain fellow bloggers may recognise this
tree with its silk nests... 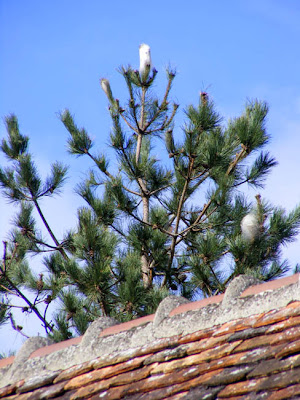 Pine Processionaries Thaumetopoea pityocampa (or les Processionnaires du pin) owe their English and French names to the remarkable behaviour of the caterpillars. The adult moths are good flyers, but only live a short time, as they do not eat at this stage. Everywhere they occur they are kept under surveillance and control of their numbers is attempted, as they can cause considerable damage to commercial forestry. A single colony can eat 2kg of needles, and it only takes 4 or 5 colonies for a 20 year old tree to be denuded. The consequence is that the tree can't photosynthesise, so it doesn't grow, and repeated defoliations therefore have an economic impact. The trees also become more likely to succumb to other stresses, such as drought or wood boring beetle larvae.

They have been present for a long time in the south of France (except for higher altitude locations such as Ventoux) but for some decades now they have been moving north and gaining height. Now they can be found in the south of Brittany and the north of Burgundy, although there is a mysterious lacuna around Orléans. The progression has been rapid - about 50 km every decade - seemingly associated with climate change and the practice of preferentially planting pine trees along autoroutes. In this way, it is predicted that Belgium and England could be reached, up to a latitude where the days are too short to allow the caterpillar to develop.

A file of over 70 Pine Processionary caterpillars
crossing a farm track in April last year. 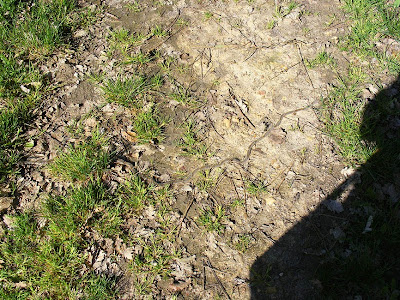 The caterpillars eat all types of conifers, including cedars, Douglas fir and larch. The female lays her eggs on the trees which get the most light. If the plantation is mixed, she will target Black Austrian Pine over cedars. The adult moths emerge in July and August and can fly as far as 25 km away. They are very dull grey night flying creatures.

The newly hatched caterpillars immediately spin themselves a lightweight little silk 'pre-nest'. They leave this shelter every night (unless it is very cold) and feast until the early morning. Fabre describes them following their silken trail, and we now know that they impregnate the trail with a pheromone which tells them and their brethren how old the trail is, how often it is used and so on.

Well nose to tail here, but even if they get
separated they can follow the pheromone trail. 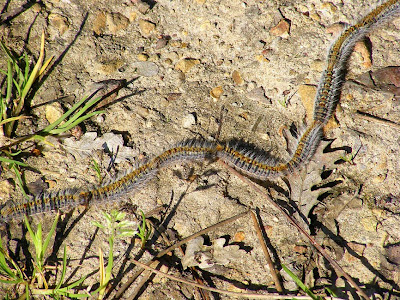 At the beginning of winter each group of a hundred or so caterpillars construct a big nest on a twig well exposed to the sun. This nest is a double layer of silk strands, without an opening. To come and go the caterpillars work their way through the matrix of strands without cutting a hole in the structure. The nest acts as a sun trap and the interior can reach over 20°C more than the outside. The caterpillars spend all day huddled together in the top of the nest, whilst their droppings accumulate in the lower part.

From February to May they start coming down from the trees and forming the processions they are known for. A caterpillar destined to become a female moth will descend, followed by all her brothers and sisters, nose to tail, to search the ground for a suitable spot to pupate. At the end of an expedition, which can take 5 days, she will stop, the troop will regroup around her and they will all dig themselves into the earth 5-20 cm deep. Underground, each caterpillar spins its cocoon and goes into diapause. This state of suspended animation can last from anywhere between a few days and 5 years.

The rash caused on a moderately sensitive person after she picked
up a cat which was carrying the caterpillar hairs in its fur. 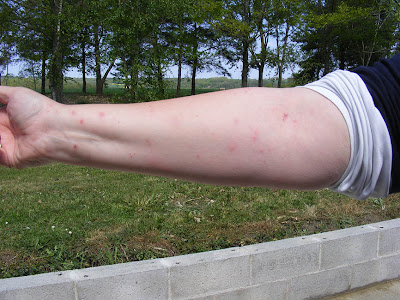 Where there are large plantations a biological control is now being used. A bacteria* is being aerially sprayed onto the trees to kill the caterpillars. For isolated trees, mechanically cutting the nests out and burning them is the most effective. Although not really recommended (or strictly legal) some people deal with the problem by shooting the nests with buckshot. If they don't succeed in bringing the nest down it doesn't matter because the wounded caterpillars become infected and transmit the infection to the others. Once they are down on the ground, pouring boiling water over the caterpillars will kill them, but there will still be hairs floating down from nests and in the surroundings. No method of control is guaranteed however, because of the long diapause.

At the moment there is a lot of research going on to develop survey methods, improve control and find out more about less problematic biological controls such as the role certain birds can play (e.g. tits).

*The bacteria is Bacillus thuringiensis. To be affected the caterpillar must eat the bacteria, which produces a poison on exposure to the gut fluids. This bacteria can kill many types of caterpillar, not just the target species, so must be used in an informed and careful manner.
Posted by Susan at 09:00