Yesterday was the annual automobile bourse at Noyers-sur-Cher, the town across the river from St-Aignan. We went last year and were sort of ambushed: we thought it was just a car bits sale, but in fact the Centre chapter of the Traction Universelle club have lunch together with food they have brought for the occasion. Realising this too late, we added roast chicken and chips (frites), which was slightly embarassing as we had to buy them from a stall.

This year we went prepared, with two bottles of wine, some carrot and beetroot rapée, and oven dried tomatoes, both of which Susan had made. We also took some shop bought paté de tete and half a home made cake.

This made joining in a lot more comfortable, but we were still outshone. Not only were there two varieties of home made boudin noir, rilletes and terrine, but Fabien had also brought some of his home made wine - a 2009 still aunis rose and a 2010 méthode traditionelle sparkling from the same grape variety.

A table laden with meat and wine. 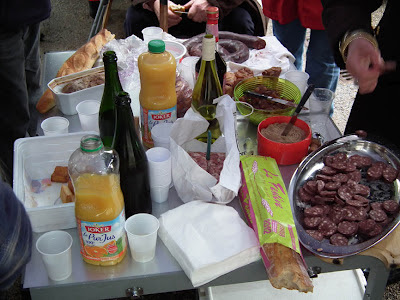 I don't think I have ever had such a meat laden meal in my life - the only vegetables available being what we took, and a jar of cornichons. It was all incredibly tasty, and a bit unexpected: it appears that if you drive a classic Citroen you also need to be able to make smallgoods from wild boar that a friend has shot. Or at least méthode champenoise wine. 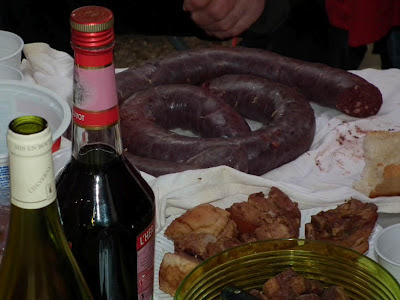 Now that looks tasty! Very much up your street... you're not a very vegetative "foodie".

Did you see much at the bourse, find the 'second' limo or get bits for la Dame Noire? Or, looking at that spread, was much of the time spent making sure that no one had too much to take home?

The WV... because I know you like them... is "ricymend adena"... so if he can mend old hand-operated printing presses... you'd better go searching for Ricy and see if the does gearboxes.

How is dear Celestine - still not well? Was she sad being left out and miss her friends.
Any luck with having her back on the road as yet?

Tim - no purchases, although i was tempted by new stop light glass - nice and clear, just what people driving too close need.

Leon. Nothing definite yet. I realise that it's almost 4 months since I have driven her - far too long. I will lose my gear changing skills.