While we were in Paris in February we took the opportunity to visit the Cité de la Musique, with its museum dedicated to music making.

The first gallery is early keyboards and these are just some of the instruments that caught our eye. These ones are all clavichords and harpsichords I think, but I don't really understand the technicalities - for a quick lesson see here.

The museum catalogue is online here if you are interested and can read French.

A pair of folding harpsichords by Jean Marius. 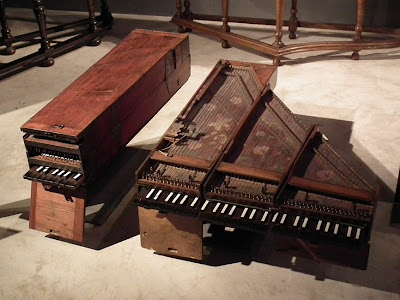 Wikipedia has a very comprehensive entry on folding harpsichords, featuring these very examples. Apparently making them portable meant compromising the sound quality and musicians are generally rude about them. They are called clavecin brisé in French. 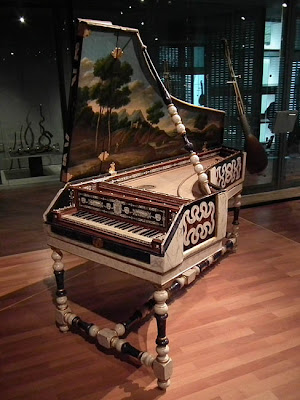 Made in 1677 and decorated with ivory and engraved mother of pearl it was ideal for accompanying a singer. The exterior is a trompe l'oeil, painted to fool you into thinking it is pietra dura (inlaid semi precious stones). 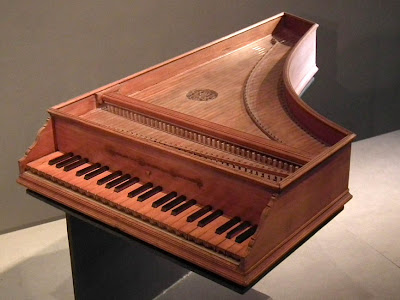 Small, neat and not nearly as ostentatious as most of the others, this instrument was made in Venice in 1543. 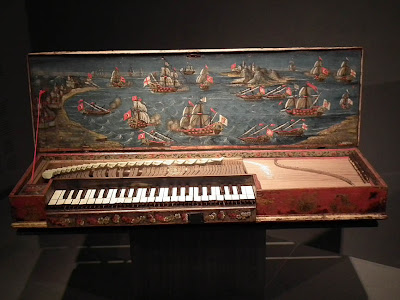 Although this instrument is called the Lépante clavichord, not much is known for sure about it. It is probably 16th century and probably Italian - although it might be German. The somewhat unusual choice of lid underside decoration is possibly a depiction of the naval battle of Lepanto, fought between a coalition of European Catholic states and the Ottoman Empire, off the coast of Greece in 1571. The outcome of the battle prevented the Ottomans invading Italy and dominating the Mediterranean. It was also the last major battle fought using galleys and caught the popular imagination of the time.

Do you reckon Hans Ruckers made this one? 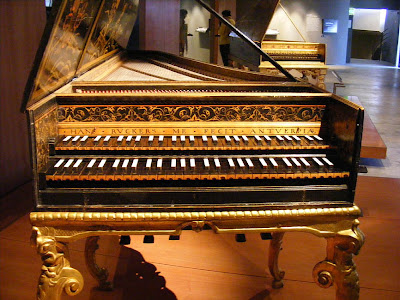 The Ruckers family were based in Antwerp and made harpsichords for several centuries. Their instruments are highly regarded for their beautiful resonant tone and the family's methods of construction are still used today by instrument makers and restorers.

Nahh! Can't be a Ruckers that last one... it's a forgery.. the guy couldn'y spell... look... he's written RVCKERS... typical what people will do to get on the 'money wagon'...
Harpsichords are plucked with a quill like a harp is with the fingers... and are harp/grand piano shaped... clavichords are struck... I think using small bone hammers... and are always rectangular... like an upright piano. Both gave a quiet sound... fine for a living room. Clavichords were more portable... but I like the folding harpsichord you've shown... an ingenious way of getting the sweeter sound round the slightly less grand houses... the piano evolved from the harpsichord getting a clavichord mechanism and gave a much more powerful sound with better control.
But listen to some Vivaldi harpsichord played on the original instrument vs. the piano arrangement and you get two totally different experiences... personally, me, myself, I prefer the former. Early music on original instruments is a wonderful sound... nowhere near as brash as orchestral arangements.

It's a well known 18th century 'forgery' made by Goujon in the 1740s, in the style of a genuine Ruckers that had been enlarged (a la grand revalement) to enable it to play the later repertoire. This instrument was then 'improved' by Swanen in the 1780s by including knee levers (visible under the keyboards). The instrument was, however, thought to be genuine until the 1960s. Hope this clarifies the instrument's history.

Thank you anonymous early keyboard enthusiast for this background information. Much appreciated.