Yesterday I published a post on spring wild flowers, but quite by chance, on Friday, we happened across a species that is possibly the most special of all for this time of year. My friend Jean (botanist, male, French, not blogger, female, English) emailed me to say that les fritillaires ont commencé leur floraison dans la Vienne. I was delighted to be able to respond that oui, et au bord de l'Indre. 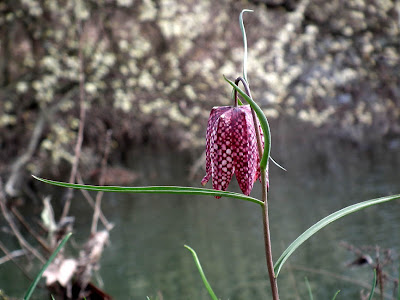 Snakeshead Fritillary Fritillaris meleagris, known as la fritillaire pintade in French, survives in a few dozen places along the Loire and its tributaries, and another dozen in the Brenne. It is a plant of old fashioned water meadows, that is to say, rich pasture along riverbanks which flood annually in the winter. This is a very rare habitat nowadays, and so the plant is also very rare in the wild. 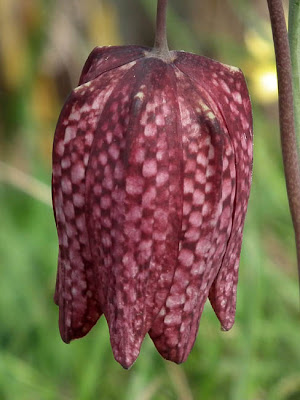 The distinctive chequerboard patterned petals look as if they have been folded into some sort of origami box. If you see one there is no mistaking it for anything else. Our chance discovery of them on the islands in the river at Pont de Ruan is our first sighting of them in the wild. They are available as a garden plant and I have grown them, but sadly lily beetles are very partial to them and they have not survived in our garden.

That is a beautiful flower. I've never seen one before, and certainly haven't seen one in the wild.

hadnt heard of this...it is beautiful

That IS special. I've never seen them in the wild. In fact, the first time I saw them was in a spectacular spring planting in Fitler Square in downtown Philadelphia.

My favourite .. I have seen them on walks around Vienne.... and they only last a short while! I once successfully planted them in a lawn but they only flowered the one year!

In my former life I was a "Friend of Hurst Grange Park" back home. We were lucky enough to have fritillaries in what later became known as "the wild flower meadow" and I loved them!