Gardening on the Ocean Floor

With this spell of warm dry weather we've been having I am madly digging to prepare our vegetable garden. The soil here is full of degraded chalk and limestone. Mostly it's just rocks made out of little sea creatures or bits of creatures too small to identify. Every now and then though, whole chunks of fossilised coral sponge emerge from the earth.

The coral sponges in our garden are easily recognisable. 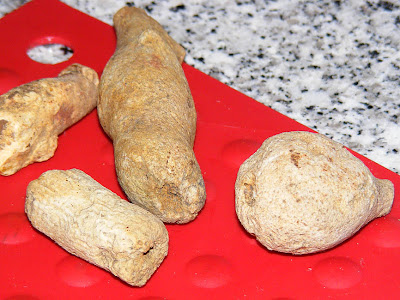 In the distant past this area was under a warm shallow ocean. It advanced and retreated several times until finally, millions of years ago, it retreated never to return and leaving us with what geologists call the Paris Basin. Some of the Paris Basin is still under water - for instance the English Channel (aka la Manche). Other parts, such as south-east England and northern and central France are now high and dry.

The soil here is chalky and the rocks limestone because of this marine legacy. The sea left behind the coral sponges in our potager and the stone our house is made from. Here in Preuilly we are about 90 m above sea level, on the southern edge of the Paris Basin. To our south and beyond the Brenne to the east the land starts to rise towards the Massif Central.

Susan, I think you'll find that these are all sponges... certainly the egg-shaped one and the fish-shaped one are... I'm not sure about the tube, but I think that might be the stem of a much larger version of the egg-shaped one. Do you find the Devil's Toenails in your patch?

Given where you've chosen to photograph these, the WVs are rather apt... first one is "ffarle"... a type of soda bread.. the second is "nsardsr"... your comment on trying to eat one of these "ffarle"s.

I'll look the egg-shaped sponge up in my guide if I can find where Pauline's filed it... I haven't got my head round the biblio's layout yet... except the sci-fi/fantasy shelf unit.

Tim: It never occurred to me that they were fossil sponges! I've done a brief internet search and it seems sponges are much more common than coral fossils. I've never heard of the Devils Toenails and we've never found anything that looks like the pics of them on the internet. You learn something every day!

I'm fascinated by rocks and it certainly brings some much needed awe and wonder amongst my pupils when I show them something special, which might be 450 million years old!

Those are fascinating finds.. We are always on the lookout for such 'treasures'.

Re Tim's comment.... I'm so glad I'm not the only one who files things away. In our house if it stands still it will be filed. Poor Colin daren't stand still for fear of never finding himself again!

Gaynor: It's always good to impress the kids.