At about 10.00pm on Friday evening our main computer caught a virus. Or to be more precise, some malware, which hijacks your screen and tries to extort money from you to get it back.

The virus we have isn't a new one: it's been knocking around in some form or another for a couple of years. Every now and then it causes a fresh bout of infections, usually caught from perfectly legitimate and innocent sites. Usually those businesses sort themselves out quickly (as did the site I caught it from), so no names, no packdrill. It's is known under many names, most of which include the word "ukash" - the system by which you pay to supposedly sort out the problem.

The first thing you see when the virus hits is a variation of the following screen - there are French, Italian, German, Spanish, and a couple of UK ones (at least).

What we had on our monitor. 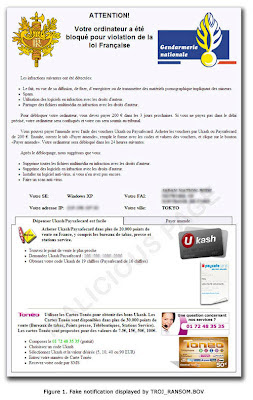 One of the UK variants 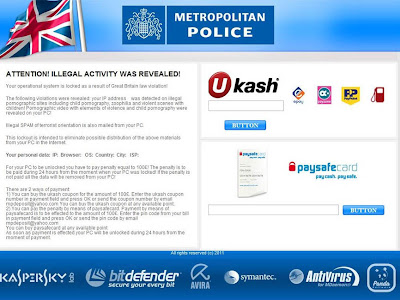 Once the virus is there, it is very difficult to do anything at all with the computer - the screen image continually reappears, and it corrupts your explorer file (the one you use for navigating windows) so that "ctrl-alt-del" doesn't work either.

I restarted the computer in safe mode, which at least gave me access to some of the computer's functions - I ran a couple of antivirus programs, including Malawarebytes, SUPERantiSpyware and AVG, all of which found infections, but didn't manage to sort it out. I also followed some of the manual removal advice found on various pages to no avail.

In the end I have posted to a really good forum - bleepingcomputer.com, and last evening received advice which I will start following some time today when I feel stronger. The great thing about the forum is that one tested expert gives you advice on your problem rather than getting a dozen different opinions, and the process is followed up with repeated tests of your system until all problems are definitely sorted. This may be a long and precise process which requires plenty of patience and brainpower, so starting it at night may not be the cleverest.

In the meantime, we are using our netbook (as mentioned here), but connected to the main monitor (I deliberately bought a netbook with an external monitor connection) and an Apple USB keyboard and mouse. I am also running it on LAN (wired) networking, which is so much faster than the wi-fi. So far this setup has been so good that when we have to replace our computers I am tempted to buy another netbook and run it like this as our main machine. It is certainly no slower than the Dell I am usually using, and having no fan it is amazingly silent. As I am fairly good about backing our information up, everything we need to continue operations we can continue doing: we have up to 5 copies on data on different hard drives, depending on how important it is. 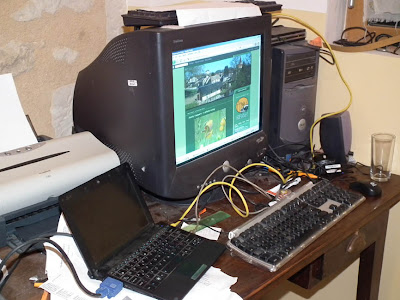 So - plenty of coffee and a steady hand, I'm going in. Wish me luck...

Edit - 1st step of the devirusing proceedure done, so far so good,. Judging by how long this one seems to take to conquer, it could yet be some time!
Posted by Simon at 09:00

I do wish you luck.

Why is it that Mac products don't have to worry abut viruses. I have had several different Mac laptops for the last twenty years and never had seen a virus yet. To be on the safe side, though, I keep my fingers crossed.

chm: More than 350 million PCs sold each year, compared with less than 20 million Macs - the bad guys probably just go with the flow.

Its interesting that your anti virus software did not pick this up... I use Bitdefender and every now and then it blocks all kinds of malware...

Hope you successfully get totally rid of it. C

I sued to use Macs, but I never really got on with using the internet with them.

C&E I use AVG, with occasional scans from other software

We use a purchased version AVG and haven't had any big problems - well at least I don't think we have!

You would not have any of this with an iMac desktop. Use an iPad for your travel machine. With the new IOS5 they update each other automatically. Dell has been building junk for the last 15 years.

Moving to mac is really easy.

I used to use a Mac - at home and professionally. I have owned a number of them, starting with a 1600/120powermac. When they went from OS9 to OSX they lost me - rubbish interface, pretty at the expense of function, and I never found a browser I like. I still have my G4 and ibook, but I can't see the point of replacing them when if I wished I could buy a new PC every year for less cost than buying a mac and keeping it until it become redundent because the operating system gets too bloated again.

Macs look great sitting on a desk, but these days that's as far as it goes. And don't get me started on fondleslabs...

I agree with Annon. Always used Dell but they have been building rubbish for the last few years. C

nasty viruses. glad you pulled the computer back from that brink.