As regular readers will know I resolved to buy a grelinette (broad fork) for working in the vegetable garden this year. Simon was very dubious that it would work and that I would like it. Mostly what he objected to was that they were expensive.

However, he was kind enough to point out to me a few weeks ago that Point Vert had them special for just under €60, albeit called bio fourche-aérateurs. This was such a good price I was extremely skeptical about the quality and the picture in the catalogue did nothing to reassure me. Since I went past them on the way home from the supermarket though, I called in to look. I was amazed to find a robust garden weapon, exactly what I had been looking for!

Grelinette, with the serfouette on the bench.
In the middle distance is our completely cold frizzled
strawberry patch - they look dead, but I expect they will recover. 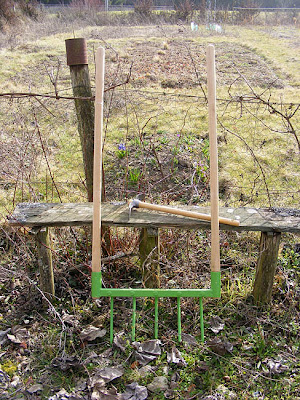 After coming home to tell Simon I felt it was worth buying I went back there the next day and purchased it and a serfouette for €16. I don't know for sure what you call this smaller tool in English (according to Reverso it's a weeding hoe). It is a sort of cross between a hatchet and an ice pick. I bought it because the man we bought the orchard from had one that he used to plant the half dozen tomatoes he gave us when we exchanged.

Yesterday being extremely mild and dry in the afternoon I decided the time was ripe to go down to the veggie garden and do some digging. I need to get the rest of our onions and garlic in (some were planted back in November and have come through the cold with no particular issues, and a third batch have now been in the ground for 12 months, having done nothing during the drought).

About an hour's worth of digging. 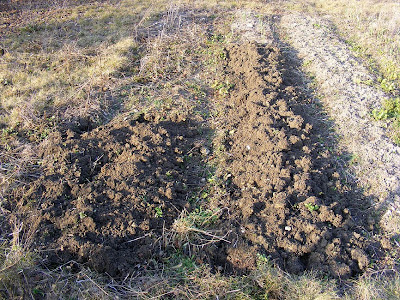 I am very pleased to report that the grelinette is just as I had hoped. Two of its tines are shorter than the other three and offset, which I think allows it to slide easily into our quite stony soil. I like the fact that I can properly stand on it if necessary to get it all the way in (I've never mastered the art of doing this with an ordinary fork). The main advantage is that to dig you do not need to bend, lift and twist all at the same time. For people like me, who aren't particularly strong or athletic, it is so much less exhausting to use the broad fork with its step back, press down action. The hardest work is shaking it from side to side, which you need to do if your soil is clumpy like ours. I'd like to be able to leave it down at the orchard too, as it is heavy to carry, but even in Preuilly I think I would risk getting it stolen.

All in all I am very happy with my purchase (and the serfouette made short work of some wild parsnip roots). I am very grateful to Simon's parents, as the grelinette was bought with money they gave me for my birthday.

I'm glad you found your fork Susan... it looks a good weapon! At that price we might consider adding it to the arsenal... the serfouette is not just a weeding hoe... it is excellent for making seed drills and covering them over...pointy end for drill, blade end held horizontal to the row and at a slight offset draws the soil gently back over the seeds... much better than using a rake! Try it with beans or peas
I use ours for cleaning the wheels of the two-wheel tractor as well.

WV... for Simon... "ndenco laimundi"... have a good weekend and lai around on Mundi to recover.

I have to admit that I would never have thought of digging with it. I though this was for aerating the lawn! What do I know. Diane

Tim: useful hint for the serfouette - I did as you said to plant onions and garlic yesterday.

Diane: they do look like aerators, and you could use them like that, but they are designed primarily for digging organic gardens where you don't want massive soil disturbance, just a bit of fluffing to make planting and weeding easier.

C&E We don't know - and quite likely we will never find out as a certain person who is good at breaking things does not intend using it :¬)