I love vanilla, but to buy the pods in the supermarket is barely affordable - they work out at nearly €2 each for the cheapest brand. So naturally I was very interested to see a stall with vanilla products at extremely affordable prices at the Foire au Safran in Preuilly this February.

The pods looked good - rather like oiled leather- and they smelled good, but it seemed difficult to believe that they were less than a euro each. I quizzed the stallholder, who said that he dealt directly with the producer on Réunion and because the vanilla was not going through multiple hands and getting fancy packaging, he could price very keenly compared to les grandes surfaces. The vanilla on display was the harvest of 2010 he told me, and should keep till 2014. I complained to him that very often the keeping quality of supermarket vanilla pods is poor and they go mouldy in the packaging before I've even opened it. He said the best solution was to individually wrap the pods and freeze them. Half an hour on the kitchen bench and they have thawed ready for use, according to him. Somewhat to my surprise, this turns out to be true and they freeze and thaw quickly and conveniently, with no appreciable loss of quality. (Much of the advice I have found online says you must never freeze vanilla, but no one is going into any real detail about why and I can't help wondering if they are all just mindlessly regurgitating the standard advice. I've also discovered that the mould I've seen so often on vanilla beans might actually be crystalised flavour compounds and not something that will ruin my vanilla.)

Pimento and vanilla on a map of Réunion. 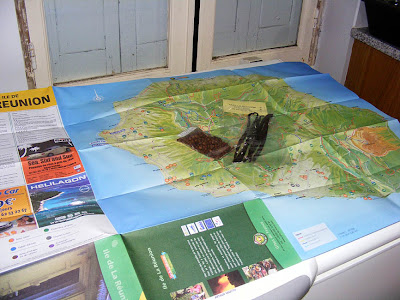 He had a number of different vanilla products - powder, essences and paste as well as the pods. In the end I settled on a conservative purchase of a pack of 6 pods for €5, after considering getting 25 for €20 and/or some paste. I also bought a €2 little packet of pimento (allspice) berries, poivre de jamaique in French, which I have found impossible to source elsewhere in France.

The vanilla seller is called Dany Blot and he is based at Montlivault in 41. His mobile number is 06 85 90 86 59. I recommend keeping an eye out for him at the specialist markets in the area.

The island of Réunion is a Dom-Tom. That is to say, it is a French overseas administrative region, a Département d'Outre-Mer - Territoire d'Outre-Mer, and as such, part of France politically, sending representatives to sit in the National Assembly and the Senate, with the same status as Centre and Indre et Loire, the région and département we live in. It is situated in the Indian Ocean, between Mauritius and Madagascar and is the farthest outpost of the Eurozone. Quite a few local people here have strong connections to the island, having grown up there or visited regularly for holidays . I think at least one of our readers grew up on the island too.

Vanilla orchids have been successfully cultivated there since 1841, when a slave boy on the island called Edmond Albius developed a method of hand pollinating the flowers so they could be grown commercially outside their native Mexico and away from the single species of stingless bee that pollinates them in the wild. As a result, the variety of vanilla grown most in the world is known as Bourbon, after the island's pre-Revolutionary name, and Madagascar, Réunion and the Comoros are the world's major producers. The labour intensive need for hand pollination continues to this day and is one of the the reasons the spice is so expensive. Vanilla pods are often called vanilla beans, and in French they are gousses de vanille.

Fab post Susan... vanilla is VERY important in France... Pauline has a book on French jam making and almost all the recipes use a vanilla goose or two. Or at the very least vanilla sugar... even the bleedin' marmalade!!

We have a bottle of Canadian "Pure Extract of Madagascar Bourbon" vanilla [£8 from Costco] that will keep us going for years... so I bought one of the bottles of Sainte Lucie's Vanilla Powder [ground up bits of pods they can't sell whole, I presume]

Allspice berries we have seen locally on the "expensive glass-bottled spice" stand alone display... but we bought our last lot from the superb spice stall that comes to the "Fête des Metiers" at La Celle G. Their prices were very reasonable... also 2€ a bag. Very useful having the details of him... I'll copy those to a text file for the recipe directory on the Brain.

Interesting. Real vanilla and not the dreaded essence you get from supermarkets!

Interesting about pimento. In French, allspice (as the pimento berries are usually called) is called piment de la Jamaïque or poivre de la Jamaïque. But it's clearly not a piment, which is a chili pepper. It's more like a grain de poivre — a peppercorn. So that name pimento or in French piment comes from the name of the plant in Jamaica. Who knew?

I've bought allspice berries at Asian stores in Paris (Tang Frères, ParisStore). But I usually bring them back from America, because they are easy to transport.

Tim: can't see the point in jam myself.

Gaynor: I don't think you get essence much any more, even in the supermarkets.

Ken: I've looked in the Paris Store but never seen them. We've never been to Tang Frères. I assumed pimento was a Spanish word and the connection is via the Basque piment d'Espilette. Pimento (allspice) is native to Jamaica and Cuba and probably a few other Caribbean islands. I guess the Spanish were the first to bring it to Europe.

I think one of your readers is from Mauritius, if it is the same person we're talking about.

really. Mom wouldn't use it because she thought it was soaked in Bourbon.

I always keep mine and the fridge and have never had one go mouldy.

Pearl: soaking them in Bourbon seems reasonable to me :-) I have a batch of supermarket pods in brandy, making my own extract - I find that's the only way to be sure they won't go mouldy. I've tried keeping the beans in the fridge and they still get grey fur.