There is a word that puzzles me.

Truth be told, there are many words that puzzle me - mainly French ones - but this is an "English" word that seems to have entered common usage quite recently.

People are claiming to be "foodies", and I am not sure what they mean. Strictly speaking, I would have thought we are all foodies - try being a non-foodie for more than a week and you will see the benefits of eating. Judging by the places that self proclaimed foodies recommend on travel blogs and forums I can only guess that a foodie is someone prepared to pay over the odds for a mediocre meal. Friends of ours (who will remain nameless to preserve their blushes) often comment that they occasionally have "foodie" guests who gush about a restaurant that most locals use as a place of last resort. We have eaten there, and most of the food seems to have been micro-waved.

Food. We love it. 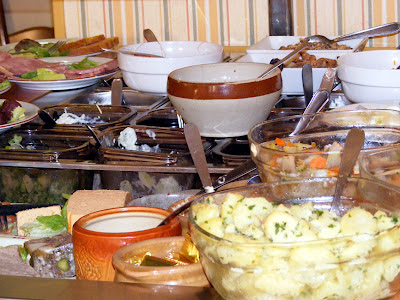 Maybe the term foodie is like the term muso. I have never met a professional musician (or even a serious amateur) who described themselves as a muso. Other people may do so, and so may people who listen to a lot of music and occasionally dabble with an instrument, but never in a professional situation have I heard someone describe themselves as a muso. Most musicians I have met hardly ever listen to music unless they're looking for inspiration, and never have background music playing. To a musician, music is never "background", it's there to be properly listened to, even if it is clearly rubbish. Anyone who spends 18 hours a day plugged into their i-thing and calls themselves a muso is usually dismissed as a wannabe.

(The photo is of the excellent buffet at the Hotel de la Gare in Montrichard - generous, delicious, and mostly made in-house or by local artisans.)
Posted by Simon at 09:00

I think a foodie is a food enthusiast, who enjoys buying, cooking and eating it.
I know lots of people who enjoy a good meal but don't pay too much attention to it other than that. They are not foodies.

I agree with you about 'foodies'... the first time I came across it was on a BBC celebrity chef type food programme... the presenter was using the term. I think it really means food-a-holic.

A "bit of a foodie" tends to be applied in 'behind their backs' conversations to people who live, breath, talk and sometimes eat food that other people have prepared... you could say... "food bores", which also covers food obsessives... rather like Pauline and I tend to be "veg bores".

We use the term "flavour hunters" when it comes to food... it translates as trying almost everything at least once, and Pauline has tried my "Tripe and Onions"... but only the once. There are many things we'll try more than the once... especially things with a built in "Oomami" factor... chocolate, beer, certain fresh veg...

But, all in all, terms like foodie, muso, etc., have entered the language as life has 'sped' up... they are the vocalisations of what has become mobile phone "txt spk".

PS, I have never heard of the term muso before.

Jean, nor had I... except Simon used it the other day when we were over at theirs...
Possibly...
Muse: someone who inspires...
Muso: someone who needs to be inspired?
and it hasn't anything to do with music at all?

'Foodie' is a very wide term. Hope you would not take it amiss if I said you and Susan are 'foodies' in as much as you are enthusiastic and interested in food and are knowledgeable about its preparation and consumption.

By English standards a high proportion of the French are still 'foodies' – thank God, otherwise eating out in France would be as hazardous an occupation as eating out in England. English establishments all too often leave one feeling not only ripped off but also bloated. Sometimes the chief/sole benefit is that they give someone a rest from having to cook.

It's certainly not something I would call myself...

I like food, I know a bit about it. The problem I have with it is that most of the self procalimed foodies I have met really don't know much at all about food. Except maybe knowing how to to pay a lot of money to get a meal

Tim - it's what non-musicians think musicians refer to themselves as. We don't unless we're being very post modern ironic

this 1968 piece by nora ephron in new york magazine i think was the beginning of the idea of foodie as in groupie.

A food groupie. I love it. Perfect.

Now to dismiss the image every time I meet one :¬)

That article is really amazing... nothing has really changed except the names of the people... There is even a mention of the Peston Bloominthrall 'scientific' cookery... not new at all!!
And as for the reference to Lancers rosie... a wine on par with Blue Nun! But try Lancers vino verde [you can get it in the Portuguese food shop on the RN10 between Tours and St. Maure]... excellent in summer.
I have now linked the word "foodie" on our Aigronne Wildlife page to this posting... and keep up the cynical view of the world Simon... it is very entertaining.

WV... because I just KNOW you like them is... "Ounduse Boarge" a very good name for a "gourmet" chef... the sort who dictates what wine you are drinking with which course!