A Little Piece of Australia

Many moons ago (28, to be more or less precise) we were in Australia, bought an extendable Hills clothesline and brought it back to France in our largest suitcase. There were a couple of reasons for this - the main one being how flimsy European clotheslines are by comparison.

Once the clothesline was home we discovered that the wall we intended to attach it to wasn't up to the job, so we had Alex build a frame to tie the wall back to. Once that was done Simon realised he had to dig a 3' (about 1 metre) deep hole, fill it with concrete and stick a post in it. Having done some digging in the garden previously he knew what he was in for and the metal post became somewhat of an elephant in the room.

At the end of last year we remembered that Niall and Antoinette had given us their builder - Ken Blomeley's - contact number and that he might have a post-hole digger, so we rang on the off chance. He said it wasn't worth doing by machine and duly dug the hole by hand (more or less). He also solved the problem that had been niggling us, of how to set the pole so it was good and stable but still be easily removed.

Ken and his petrol powered destroyer 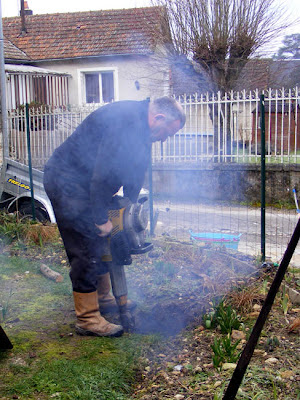 Making sure it's all square 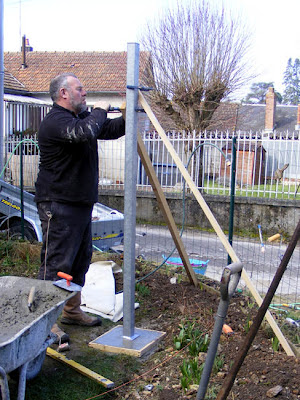 First task for me (once the concrete had set, the weather had improved, and I actually left winter's torpor behind) was fixing the cabinet to the wall. Drilling the holes through the brick was easy, as was the placement of the wooden block behind the bricks to receive the screws. Unfortunately I tried to overtighten the second of the screws, resulting in tearing out the hole so the screw wouldn't fasten. I got around this problem by applying method 2, one of the hammer in screws that we bought to fit the back door. This is holding admirably, but next time I am in a hardware store I will buy a very long and quite thick screw so I can put it through the brick and into the frame, rather than relying on what was previously an unreliable wall.

The next worry was whether our drill would cope with drilling through the metal pole to fix the receiving bracket, but that all went off without a hitch. It all worked perfectly and so now we have the summer drying solution installed as well as recently having solved the winter laundry problem.

The post is in, the cabinet is attached to the wall 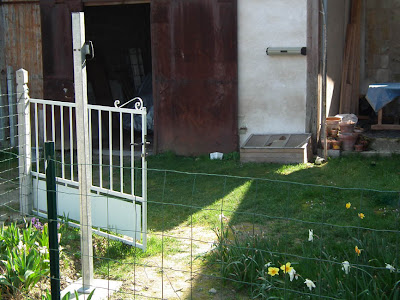 That looks a nice bit of kit... when are you going to 'Stralia again?
We are trying to solve an indoor 'outdoor' drying solution... something in the hangar that gets the wind but not the rain... we've outdoor...the whirly and a line... we've indoor... the racks and eventually the Lazy Susan... but we've nothing other than a thin wire clothesline in the hangar.

Ken is a superb find, isn't he... he's just reshaped our 'berm' so that I can get the mower up and along it and strim the banks from above... just need to be able to sow the grass and wildflower seed... but Sod's Law dictates that the drought will be with us until it is too late for this year... apologies to all!

We've yet to solve our outdoor drying solution. So far we've just carted the indoor rack outside.

Ken's coming soon to do the final stage of the terrace: lay the tiles. It should look really nice once he's done :-).