We went to see Célestine yesterday - Jean-Louis said that while he had the engine out it would be a good opportunity to clean. We assumed he meant clean the engine, but what he was getting at was that the engine bay itself was greasy and could do with a going over. Part of the problem was that I had overfilled the bidon I put in the oil can clip, so that a small amount of oil spilled every time I used the brakes.

This is the sight that greeted us
at Jean-Louis' garage when we arrived. 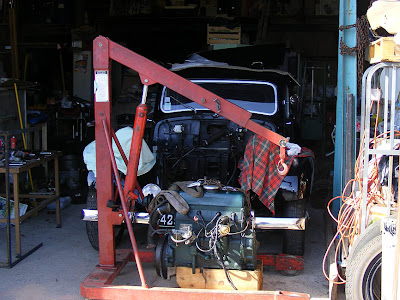 Simon cleaning her engine bay.
Luckily it was a nice sunny day. 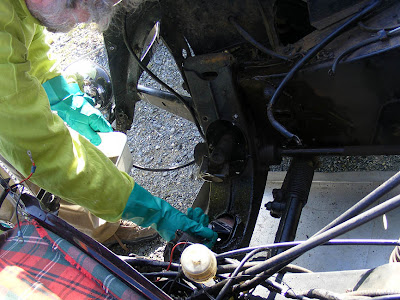 While we cleaned the oil off using a little white spirit and a compressed air blower, Jean-Louis was working on the gears, dismantling and checking every piece. A number of cogs were missing teeth, and it was this that caused the gearbox to split: a loose tooth getting jammed between two rotating cogs and "clac!". (Clac! is a word always accompanied by actions: make fists of both hands and hold them together in front of your chest, then jerk them apart and say clac!. It will make you look more French.)
Jean-Louis doing something fastidieux
with the gearbox innards. 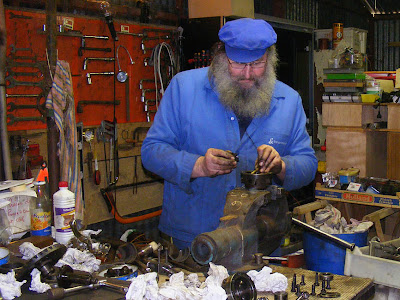 Fastidieux is a false friend. It does not mean fastidious, although in this case the English sense also applies. He was putting half a dozen pieces together, testing them, taking them apart, adjusting and repeating as necessary until perfect. He described it as fastidieux, meaning it was tiresome or tedious.

He is going to start putting Célestine back together on Tuesday and she should be ready by the end of the week. It amazes us : not only is the engine and gearbox out (and the gearbox in a billion pieces), most of the electrics are disconnected and body panels have been removed. And yet all this will all come together in the next 7 days . Incroyable!

Just love the blooo Marigolds... fine with yellow... but they would have clashed with Jean-Louis' bleus... too turquoise!

You can see that he is a mage by the beard... only mages can work on gearboxes... you have to be a bit of a "wizzard"... and as for such fast re-assembly... it is proper Citroën engineering... functional with taste and style... DESIGNED TO BE MAINTAINED!

You will be glad to get behind the wheel again and take her for a few trial spins!

Been there - done that. Know I don't want to do it again.
Hate dirt under my finger nails these days.

Glad she will soon be zipping round the roads full of new energy!

Célestine looks quite sad at the moment but I know how quickly things can come right. We have completely restored a morris minor traveller (wood as well) and a Porsche 356. Like Leon we don't want to do it again either :)
Sure Célestine will soon be back in a healthy state once more earning her keep. Diane

Nowadays the diagnosis of a lot of problems all comes via a computer.

No doubt Jean-Louis just listens to the engine ...

We certainly will be happy to have her back and purring. You are quite right Gaynor - J-L listens to the engine and stressed to us that we must do so too (we do, but just not as expertly atuned as him!)