For the past two years driving in Tours has been made more difficult by the construction of the tramway. Tours had trams from 1877, but these had gone by 1949 to be replaced by trolleybuses. Fifty years later it was decided that getting rid of trams may have been a mistake, and planning started on a new tram line which for much of its length followed the old route.

All this means that the main road leading into the city from the south and through the city and across the main non-autoroute bridge has been a virtual no-go area whilst the road was dug up and the tracks laid.

The new tram line is due to open after September 2013, with rolling stock (i.e the trams) to be delivered in July 2012 for testing. However, yesterday morning we followed a couple of trams through Tours, and we're hoping this means they are ahead of schedule. 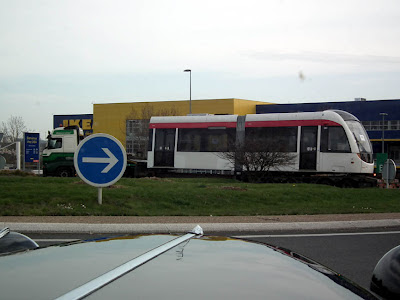 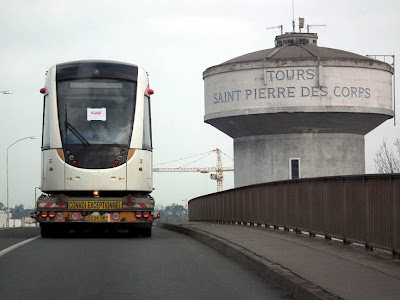 Email ThisBlogThis!Share to TwitterShare to FacebookShare to Pinterest
Labels: The Car and Driving, Tours, Towns and Villages near Preuilly

Why did they get rid of the trolleybuses.... you could run those now by solar and wind! I remember them from my youff!
Leeds is about to go retro and having given up on tramways as toooooo expensive are going for modern trolleybuses... something I might go back to see... possibly.

According to this site, the first trams will go into service in September 2013.

Ken - Officially September, - I think the website I was looking at expects slippage. We'll see later if the cynics were right!

Tim. I like trolleybuses, but I think the street furniture didn't tie in with the bright new city thing. Limoges still has them...

Obviously not Ikea's line though, otherwise they would have had a plastic covered swing tag with the name Snõtmeurkl on it..

The "IKEA" tram you have seen in Tours is on its way from the CAF plant in Spain to Edinburgh where a new tramway network is under construction too.
The future Tours tramcars are made by Alstom and have a much more modern design.