...or what to do if the cabbage situation in the next valley gets out of hand, as it did recently.

Garbure is a classic French peasant dish from the south west. There are as many recipes as there are households. Traditionally it was made in a big pot suspended over an open fire on a crémaillere*. The pot just stays on the fire all winter, being topped up as the tide lowers periodically. Root vegetables and cabbage were combined with beans and meats to produce a thick nourishing stewp (as Hugh Fearnley-Whittingstall would call it). It is impossible to make in small quantities. I made it in a 10 litre boiler and only just got it all in. The quantity will serve 16.

Bringing it to the boil on Big Berta before transfering to the wood stove. 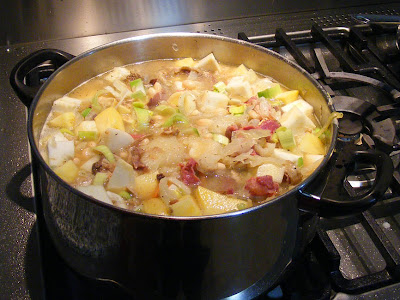 To start ours I first 'confitted' some duck legs. These are lightly cured by rubbing a mixture of salt, herbs and spices into the meat and leaving over night or even over 2 nights. Then they were put into a pan of melted duck fat and cooked extremely slowly (poached in the fat, not fried) for 4 hours on our wood stove. After cooking they were taken out of the fat and put aside to cool. It's easiest to cook them the day before you want to cook and eat the garbure. 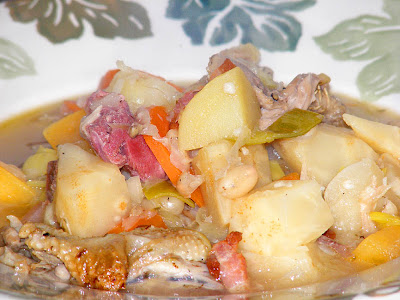 Then diced cured belly pork was fried in the boiler, joined by diced onion and crushed garlic. Once they are soft, add diced root vegetables such as celeriac (celeri rave), carrots (carottes), potatoes (pommes de terre), turnip (navets), swede (rutabaga) and leek (poireau) along with copious quantities of cabbage, a large can of white beans and pieces of meat such as lumps of confit de canard, shredded chicken meat and roughly chopped gizzards (gésiers) . Tuck in a bouquet garni and cover with stock. Bring to the boil, cover and simmer for an hour.

*a house-warming party in France is called la pendaison de crémaillere (='hanging the chimney hook', indicating that you are settled in and ready to cook and receive guests).
Posted by Susan at 09:00

We started the final cabbage on Friday... the one that was in here and didn't get frozen... all the remaining 'others' have been dealt with... the hearts cooked and eaten... the best tray frozen in a chopped-up state and loose bagged. All that we lost was some rather dried [freeze-dried] outer leaves.

Tonight we are having a stir-fry... I found FRESH bean sprouts... LeClerc in Loches/Perruson on the salad chiller shelves.