The Musée des Arts et Metiers in Paris is a proper museum, with objects. Their two prize artefacts are Louis Blériot's plane and Foucault's pendulum, but they've got lots of stuff pertaining to many different trades and industries. Many of the galleries are filled with glass display cases containing beautiful models of machinery, ranging from iron ore hammers to jacquard looms.

Blériot XI, in which Blériot crossed the Channel in 1909. 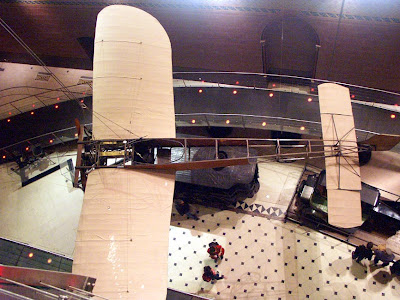 The collection was established in 1794 by a Benedictine abbot, Henri Grégoire. After the Revolution the institution broadened its horizons from just preserving technological milestones, and became a college for artisans. The museum's galleries display in turn scientific instruments, materials, construction, communications, energy, mechanics and transport. The site is an old monastery and includes a church, which houses a reconstruction of Foucault's demonstration of the rotation of the earth, with a large brass pendulum swinging to and fro. The original pendulum sits in a glass case to one side, and hanging from the ceiling a bit further along is Blériot's absurdly flimsy plane.

Sadly, the original pendulum no longer swings,
due to an accident last year. 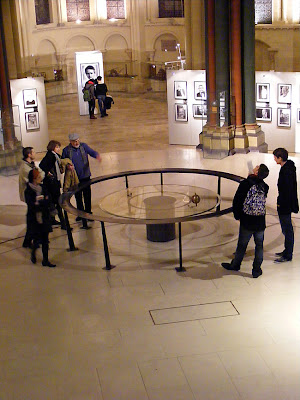 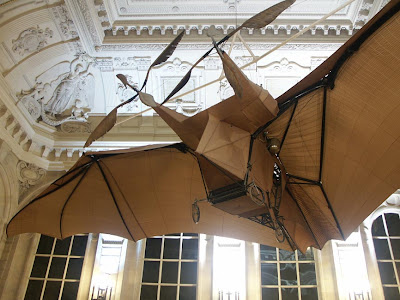 What do you reckon this is?
A. the ancestor of the windmill
B. the first mechanical scarecrow
C. the precursor to the aeroplane
It's free after 6.00pm on Thursday evening and the first Sunday of the month too.

Looks like just the sort of museum my husband would love!

CHM: yes, apparently it is based on the bat.

C, a flying machine prototype, but also B. Any crow who saw this flying towards them would have every right to be scared.

And also A, because I think it might windmill out of the sky at the first opportunity.

Everyone's a winner at our quizzes.