Recently I bought a forequarter of lamb at the supermarket. Legs were too expensive, being about €35, but this was a good price, €6.50 per kilo, and gave me 4kg of shoulder, chops and weird bits. I made the weird bits into Lancashire Hotpot and have frozen the chops to grill and the shoulder to slow roast Greek style with lemon and herbs.

The thing that really caught my eye though was that this was French lamb and it had a sticker saying that €1 from every sheep sold would go to a heritage foundation and fund the restoration of pastoral heritage. Normally French lamb is completely unaffordable - even the less desirable front end, and I was intrigued by the heritage foundation. 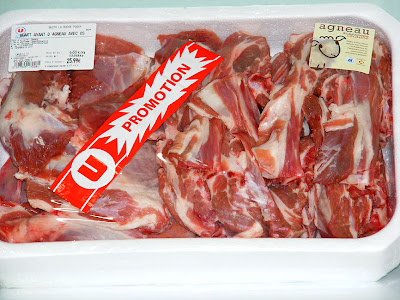 It turns out that the lamb is raised in an area called the Lacaune, around Roquefort. Every year their lamb is ready for slaughter in late winter. In the past, they had experienced the dreadful situation of taking lambs to market but not being able to sell them. The problem was that they needed to sell for more than the supermarkets were paying for imported lamb, and their product was traditionally seasonal. They were not geared up to provide a steady year round flow in the way the supermarkets preferred. In 2006 they decided they had to do something. After all, they were raising a high quality local product using traditional low impact farming methods. They needed to break the trend of downward spiralling prices paid to producers while the supermarkets charged more than most consumers were willing to pay. They had tried and failed in the past with a certification, so they tried something different.

The producers, dismayed by the fact that they could not compete with the cheaper imported lamb, came up with a cunning plan. Somehow, remarkably, they formed a co-operative that included all levels of the industry, from supermarket buyers and specialist farm suppliers to abattoirs and packers.

Now that the producers and retailers belong to the same co-operative, they work closely with each other, to communicate when the product will be available and in what quantity. It also facilitates promotional activity, with the cute picture on the label being a key part of the new strategy. Hopefully, consumers now recognise the logo, value the product and the commitment to preserving rural heritage and farming practices. The lamb is keenly priced, so while it is still more expensive than imported lamb, it's not so much that French consumers leave it languishing on the shelf. So far, it seems to work, because everyone has a vested interest in it working.

I am all for this. Not that I despise New Zealand lamb, but if you pay a little more for a local product and by doing so you encourage saving the environment and a healthy way of life, it is worth it.

We agree with CHM.
Not still at the Super-U is it?
How recent is recent? Got a pair of Barnsley Chops t'other day that were Royaume-Uni... but we'd prefer to get lamb like this. The whole principle is much better for the farmers and, in the long term, the environment.

I'd much prefer the local lamb too, if the price is affordable. I'll definitely look for the Lacaune lamb when I get back to Saint-Aignan. Thanks for telling us about Lacaune and its lambs.

Susan,
Your post was really timely. I noticed that you bought your lamb at SuperU, but the Intermarche at Noyers has included the same lamb in their recent circular. I'm off today to fetch some.