It's the sort of thing you expect to only encounter in fiction, but in 1999 a local politician and amateur art historian noticed two dusty pictures hanging under the organ loft in the church of Saint Antoine in Loches. He was intrigued by the insignia painted in the top right corner of each, and asked for advice from the regional historic monuments conservator. They soon worked out that the coat of arms belonged to Henri IV and Louis XIII's brilliant and erudite minister of state and ambassador to Rome, Philippe de Béthune (1565 - 1649).

It is thought that the paintings belong to a group of four that Philippe purchased in Rome which are mentioned in a slightly later detailed inventory of his estate. The paintings are versions of Caravaggio's Supper at Emmaus (La Cène à Emmaus) and Doubting Thomas (L'Incredulité de St Thomas). Caravaggio (1571 - 1610) is believed to have done several versions of some of his paintings (for example, the three versions of the Taking of Christ in Dublin, Rome and Odessa) but copies of paintings by both contemporary and later artists are also known to exist, so the authenticity of these hitherto forgotten paintings was immediately up for questioning. He was an immensely influentual artist in his own lifetime and immediately after, and spawned many imitators. 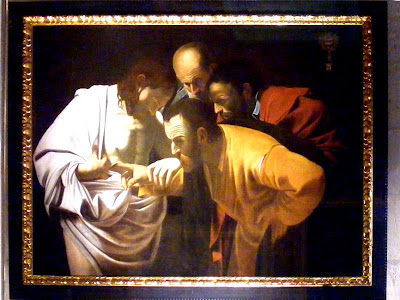 Many historians still question the Loches paintings' authenticity, declaring them to be merely good 17th century copies, but many, I think, accept that the works are likely to be genuine. As always in these situations those who believe they are genuine are represented as naive dreamers by the nay sayers, who at best are patronising and at worst querulously spiteful. Much that is belief or opinion is presented as fact both consciously and unconsciously by both sides, but the language employed has the effect of making me side with the 'genuinists' (and in any event, they are interesting and attractive historical artefacts). The most telling evidence, for me, is that Philippe de Béthune knew Caravaggio personally, and these paintings are listed in his inventory specifically as originals. He also bought copies of other works and the inventory is clear about this. He was a knowlegeable and experienced collector. Whilst attitudes to concepts of originality were different to our times, he would still have been conscious of the importance of their provenance. In addition, tests have shown that the canvas and pigments match other works by Caravaggio.

Philippe de Béthune purchased many items while in Italy to decorate his château at Selles-sur-Cher. When he died he had amassed the most important collection in Europe, which after some negotiations, was acquired by Louis XIV. Curiously, Louis does not seem to have taken these paintings, because they were confiscated during the Revolution from Selles-sur-Cher and subsequently given to the new church of Saint Antoine in Loches. At the time they would have been deeply unfashionable, which probably accounts for the somewhat ignominious placement and their subsequent slide into obscurity. 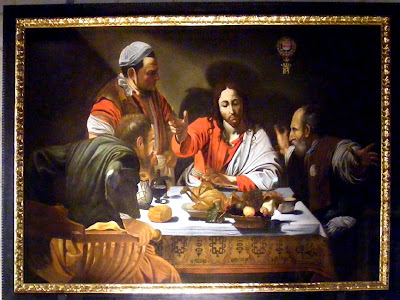 For anyone interested in comparing the paintings in Loches to long authenticated versions, Supper at Emmaus hangs in the National Gallery of London, and Doubting Thomas in Sanssouci, Potsdam. The Loches paintings are displayed in a small gallery on one side of Saint Antoine. Entry is free and there is a carpark adjoining.