The Claise and its Mills - 17th Century to the present

Except for mills and the villages that surround them, there were no other buildings on the riverbanks. People very sensibly didn't build too close, in case of inundation. Mills, on the other hand, have their feet in the water, by necessity. Over time, mills became not just the focus of habitation, but the focus of industry too. The Sauveget, a tiny stream emerging from the Forêt de Preuilly and emptying into the Claise near Bossay is an extreme case in point. Suddenly, in the 17th century, the mill at the confluence was converted to an iron working facility, with smoking furnaces, the noise of hammers and the arrival of a new population with convoys of mules to transport this new production. There were endless disputes between the muleteers and the local peasants.

In the 18th century significant works were published, showing how one could calculate the power of a mill based on a set of variables such as the position of the wheel, the flow of water and the drop in water level from one side of the mill to the other. At the same time, the law changed to allow the re-milling of grain to produce fine white flour, which had previously been banned. Up till then, water mills only produced coarse wholemeal flour. Even so, it was another hundred years before the first mill on the Claise modernised in response. 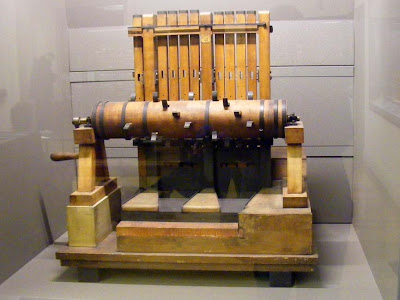 The new iron and steel industry continued to grow until the end of the 18th century. After that it slowed, then declined over the next century. In 1846 the steel mills closed. Now there is virtually nothing left on the site.

In the second half of the 19th century and first half of the 20th the smaller, less powerful mills ceased operation. In contrast, the bigger mills were enlarged and modernised with sieves, rollers and auxiliary motors. But it was their swan song. After the Second World War, in only a few years, virtually all had stopped, and the valley slumbered.

Not on the Claise, this mill (below) in le Blanc was converted to steam power in 1838, possibly because the Creuse did not provide enough hydraulic power for modern industrial processes (it was at this time a flax spinning mill). It has been restored since this photo was taken and is now a cultural centre. 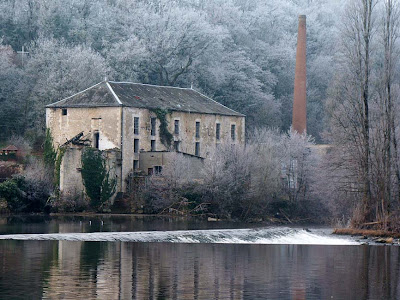 By 1960 it was clear the river was in desperate need of maintenance. All of a sudden the banks swarmed with engineers, surveyors, managers, machines, bulldozers, cranes, diggers everywhere, to stabilise the banks, dig, rectify, redress past neglect, install new weirs. It took 15 years to put everything right. Now peaceful and regulated the river attracted a new group of people, motivated by the idea of returning to nature. The number of anglers increased, but at the same time, farmers began installing pumping stations, becoming ever more numerous and powerful. Leisure and irrigation had become the new role of the Claise and its tributaries.

A model of hydraulic powered beaters as used in tanning mills
such as the one in Preuilly (Musée National des Arts et Métiers). 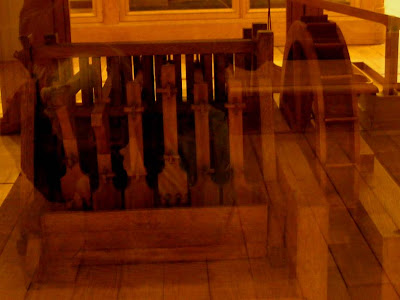 Mills had been the initial cause all over the western medieval world of the exploitation of water courses, and had been, with wind mills, the first, and for centuries, the only machines capable of putting energy drawn from nature at man's disposition. They had been sources of profit, activity and progress before being abandoned, deserted, sometimes races even drained, their big wheels immobile and dead. From time to time someone has the idea to use them to provide a source of clean energy, but even if the 100 000 mills which operated in the old days on all the rivers of France were still all functioning and used to produce electricity, they would not replace a single nuclear power station. Their best hope is that we now value them for the beauty of their sites, the uniqueness and robustness of their construction and the nostalgia in the landscape that they invoke. They attract more and more visionary private owners, determined to give them new life, or at least preserve their appearance.

The Claise and its Mills in the Middle Ages can be read here.

Email ThisBlogThis!Share to TwitterShare to FacebookShare to Pinterest
Labels: electricity, Towns and Villages near Preuilly

We looked at two mills when we were property hunting. One was near Descarte and was in an industrial area. The other was in the village of Indre a Reignac and was quite pretty but would have required much maintenance. Perhaps we will do a blog!

C&E. We all love reading other people's stories of the trauma of finding their house. I think you should do it.

The rather special nature of mill owning is reflected in the fact that SPAB have a special section for mill owners. One of the two basic rules of house buying in my opinion is never buy a mill. The other is never buy a house with a hole in the roof, so you can see how much I listen to my own advice. Susan (who can't be bothered signing Simon out and herself in).

...in so many ways, looking back in hind-sight from the present (Dec., 21, 2012 -the not so, "end of the world" Mayan calendar cut-off date)...
I would have liked it very much if the advance of mankinds' tech had simply gone as far as depicted here... The late 17th/early 18th century. Then stayed here -progressing on with little more "change".
Pity...