We have had the pipework installed for our cuisinière, which is another step forwards. I had a thought about a week ago, which enabled us to remove the gas bottle from next to the stove into the room which currently serves as our temporary kitchen, but will one day be our pantry. To this end Stéphane and I drilled a hole in the metre thick wall, through which we can put a pipe. My inspired thought, however, was to drill through the wall where it was only half a metre thick: i.e through the back of the ancient chimney. This meant we had a big thick drill bit that was long enough to do the job. Which was nice... 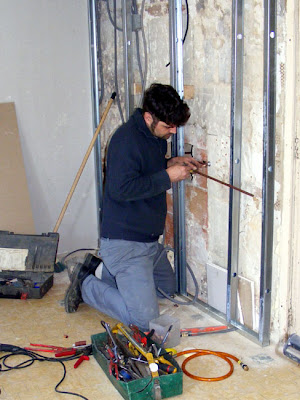 The nice man from Bertu's came down yesterday afternoon and fashioned us a copper pipe, attached the screw fittings (raccordements), and advised us of what regulator to get (apparently 1.3kg/h). He also pressure tested it. Now we can close that wall and move on to the next job, which will be jointing and painting the plasterboard.

The pipe emerges from the old chimney 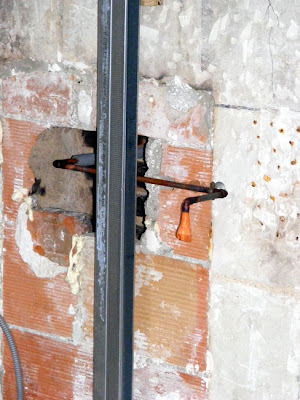 That was a neat idea.

It looks very tidy. Our gas bottles are outside. Before we moved in, someone nicked the copper gas pipe and we had to have it re-done! Ho hum.

Brill idea. Gas bottles take up so much space on account of them being round. I wonder if you can get square ones, they would be so much better.