The Claise and its Mills in the Middle Ages

The river Claise, which runs through the middle of Preuilly, isn't very long - only 88km - and isn't very wide, but it is noteworthy for the number of mills it once powered in the Touraine. The development of mills can tell us a lot about history from a technical, scientific, economic, social and landscape point of view.

The history of the harnessing of the hydraulic power of the Claise and its tributaries stretches back at least 8 centuries, with continuous intervention by man on these water courses. The Claise was favoured in this way because, at least in its passage through the Touraine, it has a natural average fall of almost a metre per kilometre, and could therefore support nearly one mill every kilometre. Other rivers in the area, such as the Creuse, Vienne and Loire, are big slow wide rivers, navigable for long distances, but unable to deliver the power needed for many mills.

Le Moulin de l'Abbaye in Preuilly, built as a flour mill,
later converted to a tannery, now a maison secondaire. 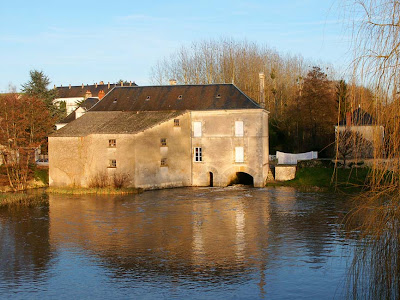 We know virtually nothing about the first mills, but they would have been modest constructions, entirely of wood. Mills from this time used multiple narrow wheels and were exclusively for grinding grain. Later, little by little, their functions diversified, iron parts began being used, techniques for wheel building improved, leading to bigger and more powerful wheels. The knowledge was transmitted slowly though. Surprisingly, for such technically intricate structures, people did not specialise in mill construction. Mill building was done on a local level, by the local carpenters and masons. As building a mill was a big undertaking, most artisans would be involved in the construction of very few - it was perhaps even a once in a lifetime operation. Consequently, individuals did not get the opportunity to experiment or build on experience very often, and mill construction stuck with known techniques.

The remains of the Moulin de la Tourneau. 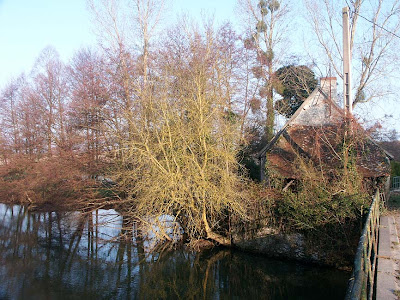 Throughout the middle ages biefs (mill streams), moulins (mills) and barrages (weirs) were constructed. Over time, first one and then another was enlarged or modernised. The Claise valley took on the look it retains to this day.

The weir for the moulin de la Tourneau. 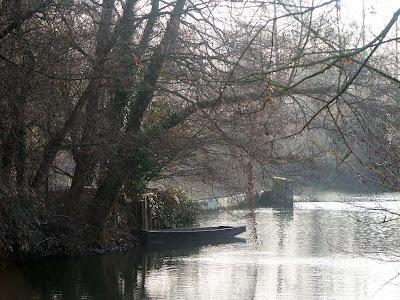 Those who remember the Claise from the 1970s have the best idea of what the river must have been like prior to the development of the mills. After the Second World War, mills fell out of use and out of fashion. They weren't maintained and fell victim to floods, which were all the more destructive because the river was no longer being controlled. The river reverted to its natural state as a small, fast flowing stream on a bed of pebbles; reduced to a trickle in summer and swollen in winter; rapids over the fords, lethagic over the holes. After the mills and their associated reservoirs were constructed, the impression is of a much wider river, calm, slow and full.

We've stayed in several mills (hotels, a B&B) and enjoyed each one. I do worry a little about their underpinnings.

Someday we hope to visit France during the Journée du patrimoine de pays et des moulins, a Sunday in June.

Dery useful, thanks Susan.... we are no 74... and Illustration 37 shows what the inside of the main building looked like... but probably only a pair of bellows and one chimney.
Fascinating... now marked as a favourite to be looked at at more leisurely a pace.

Carolyn: Quite. One of my rules is never buy a mill.

Tim: I thought you might find it useful. It's mostly very reliable, and certainly full of very interesting information. A few mills are missing and the odd one in the wrong place on the map.