Back in July 2009 we bought what we thought were tomettes (but now know to be carrelage de terre cuite*) for the base of our staircase. We said at the time that we would be ordering the second and much bigger load of tile "soon". Well - that soon was last Wednesday, and we have ordered 33m² of 20cm square tiles from Terres Cuites de la Lorne.

We have decided to buy what the owner of the business referred to as "brut" tiles, rather than the carreaux vieillis we ordered before. Carreaux vieillis are hand made "antique" tiles, the brut are machine formed. The only real difference is that the edges on the antiqued tiles are battered, but nice and crisp on the brut. As our new kitchen will probably be a more modern angular design, we think the straighter edges will suit better. We will be doing the whole kitchen/dining/sas d'entree with the tiles, but not all at once... 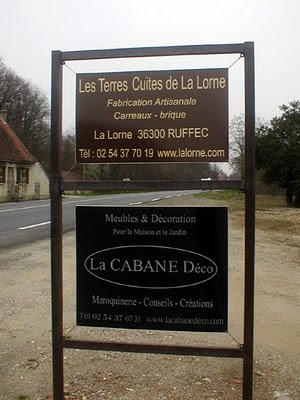 The tiles will be made in two weeks time, then delivered by truck when we are ready for them. 33m² weighs 3 tonnes, so we thought that by the time we made 10 trips with the trailer (and all that loading and unloading), delivery was worth paying for. They will be delivered on palettes to the courtyard, and I suppose we will bring them into the house as they are about to be laid.

The business has just aquired a new owner, who has installed a gift/decor shop in a part of the building that wasn't previously being used, but all the workers seem to be the same people. We were really happy with the first set of tiles, fingers crossed the new ones are just as good.

At the moment I am tussling with the thought as to whether I lay the tiles myself, or GTMI. I did rather quite well last time, but there are one or two mistakes (thankfully hidden by the staircase) and this time it's a huge area, most of which can be seen. Once of the big dilemmas I have is which wall (if any) I align them with. I have 7 walls, only two of which are square (or parallel) to each other. Maybe with some expert advice and anti inflammatories (to offset the effect of all that bending over) I may do it myself after all.

*Tomettes should really be hexagonal - square tiles are carrelage
Posted by Simon at 09:00

If it is hard to find an good axis to follow as the room's walls are not orthogonal, it is often better the face the matter and lay the tiles on the diagonal (at approx 45 degrees), as this makes the 'free geometry' less obvious. The cut tiles at the edge may be easier, although all edge tiles are then cut tiles. This is what the swiss architect Le Corbusier would have done!

Ooooh goody. That sounds like we have a volunteer!

Excellent, now we know where to get floor tiles which will match/suit when we get round to sorting out the living room floor!

Save your back, hire a pro!

Simon, you've got tiles at the foot of the stairs.... surely you are going to have to align them with those aren't you?
Otherwise lay them at 45 degrees to those....

Get Stéphane to do it... then you can blame the workman if he gets it wrong [but you'll still have to live with it!] But with Stéphane's workmanship, the look will be great!

I think you'll find tomettes can be carré ou hexagonale.

Make sure you have a very good kneeling pad!

Sweetpea: It depends on how pendantic you want to be. There are plenty of people who will insist that tomettes are southern and hexagonal, and that everywhere else has carrelage de terre cuite.