Recently a friend of ours let us know that he would be working on the restoration of the church of Saint Antoine in Loches. We had hoped to be allowed to visit the works and watch the stone masons at work, but although our friend's boss was agreable, Bâtiment de France, who oversees all historic monuments building works in France, was not. Those on site have been told that if they take any photos of the work in progress those photos become the property of Bâtiment de France too. Incidentally, the company doing the work is the same one who repaired the château in Preuilly after it was damaged in tempête Xynthia 12 months ago. 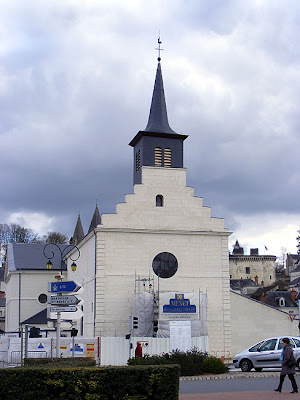 This is phase 2 of a huge 3 stage project, which essentially requires the church to be not just restored, but rebuilt. Apparently the stone it was originally constructed from was very poor quality, and the original workmanship was not good either. The modern masons have found stones on the facade pinned in to the wall by no more than 10cm iron rods. With the passage of time water has got behind these stones, causing the iron to 'explode' and push the stones outwards. In turn this has allowed other debris in the gap and plants have started growing. Their roots also push the stones out.

Unfortunately, although the masons are highly skilled and specialists in careful and historically accurate restoration using traditional methods, they do not have access to stone of any better quality. They say that a large quarrying company has bought up all the leases on quarries in the Touraine and has closed all the small independent ones down, in order to force prices up. The old quarry in Loches itself produced the best stone nearby, but it is no longer productive and is open simply as a tourist attraction. (It seems strange that the original builders didn't use this source, but it seems that the church was constructed on the cheap!) The stone they are using comes from Châtellerault, and if anything, is worse quality than the original stones. There is nothing the masons can do about it, and they take the philosophical view that in 50 years time the church will need restoring again, providing work for their grandsons.

Saint Antoine was constructed in 1812 and opened for worship the next year because access to the parish church, Saint Ours, situated as it is on the citadel rock, is difficult. (The two conical roofs peeking out over Saint Antoine in the photo belong to the towers at either end of Saint Ours.) The build quality is crude partly because it is actually the conversion of a pre-existing Ursuline convent dormitory and refectory. In 1837 the gable was topped by a bell tower in wood. It was classified as a protected historic monument in 1840, principally because of the tower and historic surroundings. The church's main claim to fame is that in 1999 a pair of paintings by Caravaggio were found under the organ loft. These have now been restored and are on display in a gallery to the side of the church.

Interesting post. I must remember not to take photos if I see any fancy restoration going on! Diane

It's a shame you couldn't make the visit. Was the reason that a visit wasn't allowed on health and safety grounds or something else?

The first time we saw the church was the wet, windy and very cold night of December 28th 2009. This was the date we bought our house in LP-P. As we were unsure whether the monies from the sale of our apartment in Thollon would come through in time, we decided to book the Hotel de France in Loches just in case.

We couldn't get any accommodation closer to LP-P, possibly because it was the Christmas period, and some hotels were fully booked and others closed. It was a Monday too!

Anyway the church was all wrapped up then.

Diane - It's just photos of inside when the building os closed for renovations that BdF like to own.

Gaynor. Those wild desperate days, eh... Not that we would want to return to them, but it did add spice to life!!

I think the reason for not being able to visit is health and safethy - the place is literally full of scaffolding, which is holding it up