Encouraged by a 30 year study of Early Spider Orchids Ophrys sphegodes in the south of England I have been diligently collecting data on my orchids in the orchard. 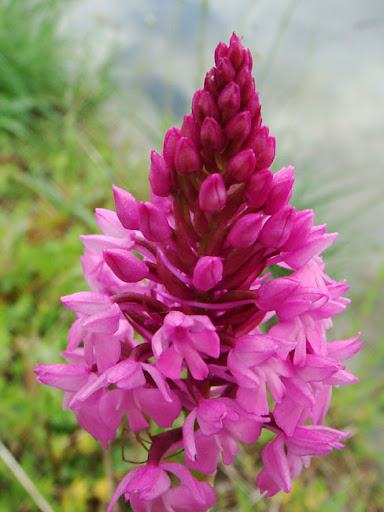 Last year we had 237 orchids (or clusters of leaf rosettes) make it all the way through the summer without going dormant early. A quarter of these flowered, and two thirds of those were Early Spider Orchids, a quarter were Bee Orchids O. apifera and the balance made up of Pyramidal Anacamptis pyramidalis, Lady Orchis purpurea and Greater Butterfly Platanthera chlorantha Orchids. This means more than three quarters of our orchids sent up leaves but went dormant before achieving flowering, which seems quite a high proportion. The English study suggests that the reverse proportions are more normal - that is, that three quarters of those that send up leaves can be expected to flower. Personally, I think our orchids were so surprised not to be mown off before they got anywhere near flowering they didn't quite know what to do, dithered and missed the boat for 2010. (The real reason is likely to be that because they were mown off every year they didn't have the resources to flower last year, but might this year, having had a full year of uninterrupted growth.)

Below, 2011 orchids (grey) overlaid on 2010 orchids (black). The x's are fruit trees, the squares are 2m x 2m, the size of the circles indicates numbers of rosettes. 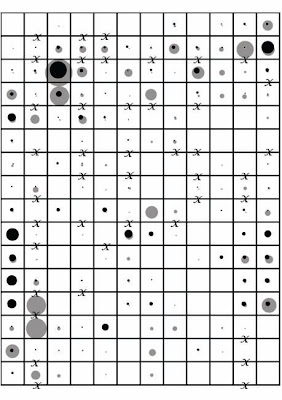 This year, numbers appear to be up. Right now there is a total of 318 individual rosettes or clusters of rosettes. I won't know how many will go dormant early for another couple of months but many of the leaf rosettes are looking very robust. Along side many of these flourishing rosettes are smaller rosettes, probably too small to support a flower spike this year, but showing that the orchids are multiplying. Almost all of the rosettes appear to be Ophrys spp, with a cluster of Pyramidal Orchids and another of Lady Orchids having reappeared in the same positions as last year. What other species I get remains to be seen, but there are Lizard Orchid Himantoglossum hircinum leaf rosettes in the middle of the track that leads up to the orchard.

Lady Orchids (flower not yet out). 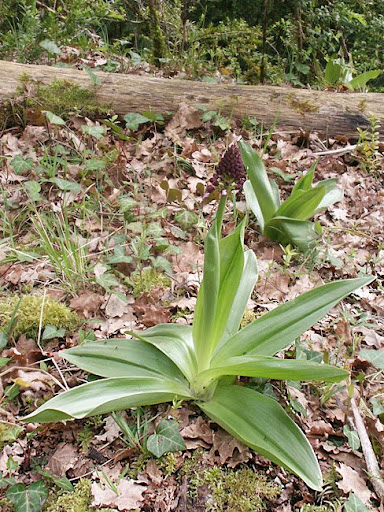 Since I am being totally nerdy about the orchids I have mapped their positions, counted leaves and taken measurements. I can reveal to you that the average number of leaves in an Ophrys spp rosette is 3.29, with an average mature leaf size of 59.07 mm long by 21.71 mm wide. In contrast, the Pyramidal Orchids have an average of 4.75 leaves per rosette, measuring an average of 124 mm long x 17 mm wide, and the Lizard Orchids have 7 leaves measuring 105 mm x 48 mm. In other words, Lizards have lots of quite long, very wide leaves; Pyramidals have fewer but very long, very narrow leaves; and Ophrys spp have just a few leaves, of moderate size. I can perceive no difference in the leaf rosettes of the Ophrys spp, even when I know from their position whether they are Bees or Early Spiders. The Ladies have an average of 4.5 leaves per rosette and their mature leaves will be almost as long and wide as the Lizards, but as they have only just emerged they have not reached their full length yet.

Anon: Thank you! are you up for some Bayesian analysis of the figures too? :-)

Even though I'm far away, I can hear the little orchids say: Thank you, Susan, thank you!

I do love to read about your
orchids. Must be such fun to
see how they've improved since
you took over the orchard. You
must be undertaking the official
orchid census now too. By the
way, have you spoken with the
mairie about curtailing the
mowing to encourage their
orchids?

It takes a lot of painstaking work to carry out such a study. Without people like you who do this, we would know, and understand even less than we do now about the environment around us.

I sometimes come across things in my tangled mess of a garden that have burst into flower after I forget they are there,it is always a lovely surprise.
I can't imagine how wonderful it is to have a whole orchard full of beautiful surprises popping up, here's hoping you get a better flower count this year.

Sheila: I spoke to Gérard (Deputy Mayor) and got a regretful Gallic shrug. He asked me how many species and if I wanted to dig them up. He can't protect them from being mown because they are on what is essentially the sidwalk.

Gaynor: It will be worth something if I can repeat the observations for a number of years.

Abbeysmum: Here's hoping, but they rely on good spring rain to flower well and so far spring has been unusually dry.