Last Sunday we went to Noyers-sur-Cher to a classic car bourse d'échange (swap meet). It was a lovely day for an outing and Célestine drew many admiring glances and comments. We parked outside the church and went off to look at a vast array of car and motorbike bits. There were large numbers of bikers in town, and the bourse itself seemed to be a bit 'bike heavy'. Nevertheless, people were heading out of the meet carrying bonnets and doors, engines and tyres, most of them in distinctly à renouver condition.

Eventually we landed up on the Traction Universelle stand where we ran into several people we knew and were invited to apéro at midday. We were also given a very nice feature tile, made in Châteauroux to celebrate 30 years of the club having a branch in Centre, our region. We think we might install it in the new kitchen. 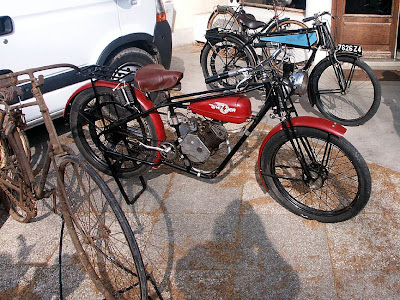 It was good to see Jean-Louis Gargot again, as he has helped us with several niggly problems with Mme Célestine. Also present were Marie-Christine and Dan, who we had met at Valençay last year. We were able to tell them that we had watched the video of their epic drive from Sydney to Darwin recently. Marie-Christine once again encouraged me to join her for the annual sortie des Birettes (Witches outing) in the autumn, when the female club members have a women only outing.

Apéro turned out to be thinly disguised lunch, with breads, goat's cheeses, galettes de pommes de terre (potato puff pastries), fromage de tête (brawn), andouillette (tripe sausage) and clafoutis (fruit in batter pudding) being produced out of bags, baskets and eskies (cool boxes) stashed at the back of the stand by members of the club. Simon dashed off to procure some rotisseried chicken and spicy potatoes as our contribution. A TU club member's stand full of car parts was hastily cleared and a paper table cloth laid out. The food, and a selection of wine was spread out and people tucked in. The fromage de tête and the andouillette was home made, from different parts of the same sanglier (wild boar), and there were two sorts of clafoutis, also home made. The andouillette, spicy and finely chopped, was particularly good, and I had two pieces of the superb sour cherry clafoutis.

No shortage of oil cans for collectors. 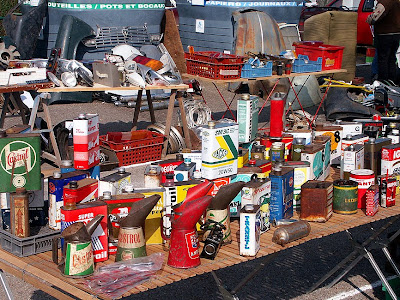 As part of the general conviviality it was apparently necessary to perform a drinking song, with actions, at frequent intervals. This went:

After a thoroughly enjoyable lunch we headed across the river Cher to visit Ken and Walt, who live about 10 minutes away. They promptly offered us some dessert (and had a delicious looking chocolate tart on the table), but we declined on the grounds that we had already eaten 2 (or in my case, 3) pieces of dessert. Instead we just had coffee then went on a walk through the vines out the back of their place.

All in all a good break from house renovations and worrying about how to most effectively advertise our business.

I've just followed the link, Traction Universelle, wonderful.
I just made contact today with our local Citroen club in Melbourne and berated our President for not acknowledging your email. We will send him your details, facebook thing etc. again.
I will also send you a new embroidered polo shirt soon as well as I've been very remiss.