I have been working on our guest bedroom this week. With me has been Stéphane, returning a favour from a couple of weeks ago when I gave him a hand at his house.

We have been putting up framework for the insulation and plasterboard walls in the guest room and associated bathroom. This has been an interesting job, as it is the first time we have really looked hard at these rooms with a straight edge, spirit level and tape measure. Our first job after that was deciding what wall we would call as being straight.

We knew the walls weren't upright...
I drew the blue line to show the line of
the old wall. The framework is plumb and totally vertical 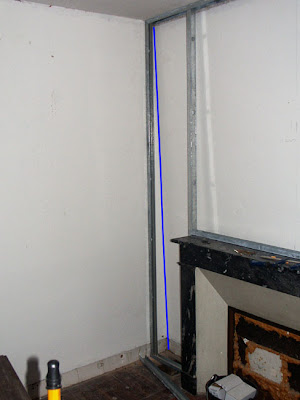 Likewise, the back wall isn't square 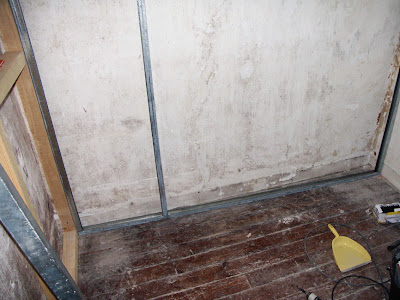 It has taken us a couple of days to get the framework in, and the next job is to put in the electrical lines. Today we are going to BricoDepot to buy a "tableau" (fuseboard) and some "gaine" (conduite pipe for electric cables). We also have to buy the mounting points for prises (powerpoints) and interrupteurs (switches). We will not be buying the actual plugs, switches and lightfittings until we have decided what sort we want (we have a million styles to chose from). The most important part is getting the wiring in so we can put in the insulation and close up the walls of the bedroom.

This is my electrical plan (latest version) 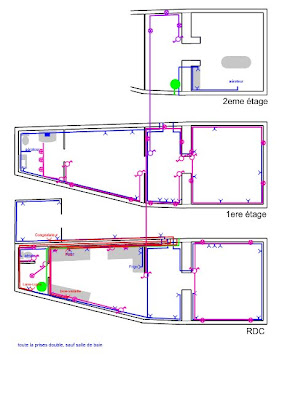 After that we await the arrival of the plumber to put in the pipework for the bedroom.

I have learnt a lot of things this week - perhaps the most whimsical of which is the French name for noggins: le petit bonhomme.

Email ThisBlogThis!Share to TwitterShare to FacebookShare to Pinterest
Labels: electricity, Our house in Preuilly