One of the most charming natural history writers, in the original French, or translated into English, is Henri Fabre. He was particularly fascinated by the bee genus Osmia, known as Orchard Bees or Mason Bees. His observations and notes on this group in particular set the standard for modern natural history and ecological research. You can read him (translated into English) on Osmia at efabre.net, a wonderful resource. Without his careful and lengthy investigation of their lifecycle and behaviour we would know far less about these bees. As it is, he describes many species, how they build nests, what ratio of males to females emerge, and all manner of delightful nuggets of information. 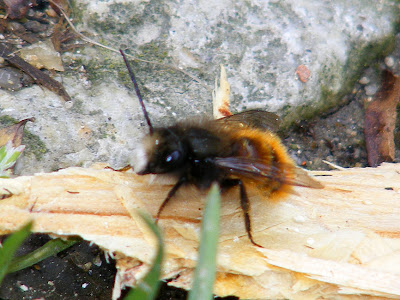 Osmia cornuta, the European Orchard Bee (l'Osmie cornue in French) is one of the most important species, as the adults emerge in early spring, just in time to pollinate the early flowering fruit trees. In our orchard the nectarines (brugnons) seem to be earliest, but the cherries, plums, almond and peaches are not far behind. Le Jardin de Lucie has recently written about this species and shown a wonderful series of photographs of a female making a nest under the table on her terrace. 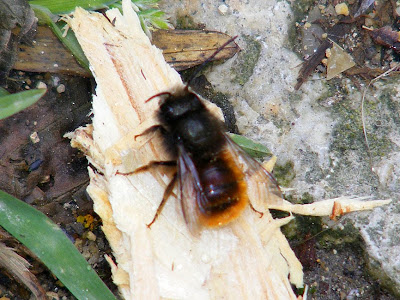 Many species of Osmia are very visible because they are richly coloured and quite large - only a little smaller than a Honey Bee Apis mellifera worker, and much more striking in appearance. Male Osmia cornuta are deep black with long brick red hair on the abdomen and a pure white forelock. They are solitary bees, in that they do not work together in a colony, raising larvae communally and producing honeycomb like Apis mellifera, but they are quite sociable, and often nest in close proximity to one another.

Males cannot sting, and females, although they have a sting, it is smaller than a honey bee's and they rarely use it. They are closely related to the Leaf-cutter bees, and like them, carry their pollen load under their belly, not on their hind legs like honey bees and bumble bees. They will happily nest in man made nesting tubes, such as bundles of hollow canes or blocks of wood with holes drilled in them. The holes need to be about 8mm in diameter and 10 - 25 cm deep.

Note: The natural distribution of Osmia cornuta is across central and southern Europe. The species does not occur in Britain, so if you are seeing a black and red bee in early spring it will be the Red Mason Bee O. rufa or more likely, the Tawny Mining Bee Andrena fulva.

Hello Susan, I wondered if we could use your photo of the European Orchard Bee on our website? https://www.theorchardproject.org.uk/ I would credit the photo as being y you and from your blog.

Could you either reply by emailing joanne.hooper@theorchardproject.org.uk? Much appreciated! Thanks. Jo

You are very welcome to use a photo and I am happy to support your project. Community based orchards are an excellent thing. I've sent you an email.