The masons arrived early yesterday, this time with the stones for the door frame.

The old stones surrounding the door were in a similar state to the stones surrounding the window, with one noticeable exception - one of the stones (the side on which the door was hinged) was an 8 inch square post of oak with no visible support. We didn't realise it was there (or that it wasn't actually touching the ground) because it had been covered with a pine plank (which I had dutifully painted last year) at some stage. 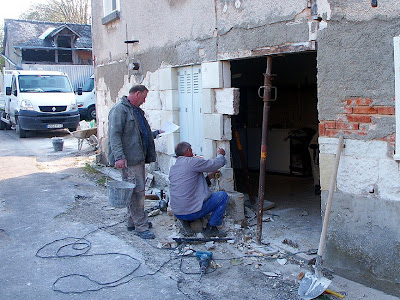 Once the post was out the remaining stonework was cut back, and the floor dug up to take our new threshold. The door will be positioned about 30cm closer to the window than was previously the case, in order to get better stonework on the hinge side. This caused the maçons some problems because the wall has a bit of a bend in it just where the new stonework starts, and the new wall and the old wall weren't aligning. It does mean Susan and I have had an increase in vocabulary, albeit one we can't use.

While this was happening, Stéphane and I
were trying to make sense of the electric spaghetti. 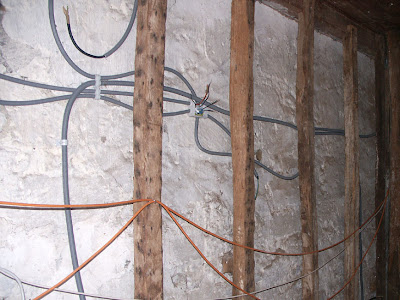 We had to go out in the afternoon to buy more stuff at BricoDepot. Because we were buying big heavy stuff (more on which sometime next week) we hired a truck from SuperU rather than have a repeat of our last visit but one. We took Stéphane with us, which meant that I didn't have to stand around looking confused, as I had a gentle hand to guide me. It all worked really well, except that we did rather get slowed down in the drive through section when they closed one caisse (checkout) and we were caught in a hardware store checkout traffic jam.

This meant we were rather in a rush to get the truck back to SuperU before 6.45. We dropped Susan off at the supermarket to ask if it was a problem if we were 10 minutes late bringing the truck back, while Stéphane and I did a real rush job trying to get the truck unloaded. Half way through the unloading Susan rang to say "no rush, we can return the van tomorrow". This was a real relief. As we had left our car at the supermarket, Susan could then drive home and help with the unloading of the big and heavy (but so far secret) item.

This is how our "back door" will look for the weekend.
Not practical, but we do get good ventilation 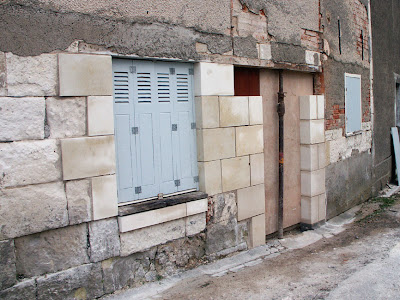 So this morning we are off to SuperU to return the van, hoping to get back before our neighbour arrives with a gift of tomato seedlings. Then I hope to get some work done on the coin d'apéro, and fit in a trip to the déchèterie.

Then, nicely rested, we can start work next Monday!

I really like the look of the new stone with the older parts - the different textures and colors.

I love the way the stones go soft over time - but only in a visual sense! Unfortunately, the weathered stones are at the stage where they will have to be rendered - covered in a layer of lime mortar and sand - otherwise it won't be long before they have to be replaced too.