Today is ANZAC Day in Australia, the official day of remembrance for the country's war dead.

As we have written about the day several times before, I thought I would post a recipe for ANZAC biscuits instead. These are delicious, but unfortunately I can't make them at the moment because I would only be able to bake one at a time in our mini oven. I didn't make the ones in the picture either. I bought them from the Tuross baker's when we were in Australia at Christmas time. 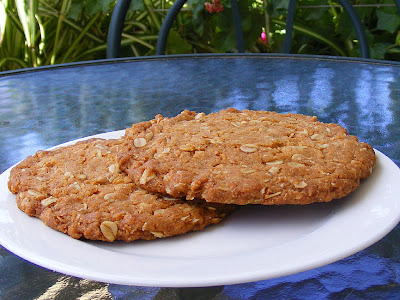 I copied the recipe from the back of a bag of flour I found in Fran's house (where we house sat), and it comes from the Country Women's Association. (In the UK the equivalent of the CWA is the Women's Institute, but I have no idea what the North American or French equivalents are.)

PS Today is also Souvenir des Déportés in France, which commemorates the French men and women who were deported as forced labour, interned or sent to concentration camps during the Second World War.
Posted by Susan at 09:00

Happy Anzac Day. I bet there will be a lot of activity in Villers-Bretonneux, a village east of Amiens, where the official Anzac war monument in France is located. Although it's a bit out of your way, it's worth a visit, I think (not today, of course!). Enjoy your Sunday! Martine

Happy Anzac day! What is "golden syrup"? Is it corn syrup?

I'm not quite sure if "Happy" Anzac Day is in quite the spirit the day was intended (although I notice there is a traditional "Happy Memorial Day" thing going on in the US, so I suppose it's just the glory of difference between cultures).

Simon, that's exactly what I was thinking before I read the comments. I was trying to find the right way to say have a nice remembrance day. My English vocabulary is not broad enough to find the right term for such a sad occasion.

I think they have some kind of celebration on ANZAC Day in Péronne, at the heart of the Somme battlefields, at the World War I memorial museum.

I have no idea what you should say to Americans on Memorial Day if anything, apart from: "Drive carefully!"

Didn't remember the spelling of treacle! Shame on me!

Susan, these biscuits look delicious, a sort of cross between a flapjack and a digestive biscuit. I will definitely give them a try. They could go down well for our charity cake-stall which we hold for "Children in Need" at work every year, especially if I label them as Anzac biscuits.

Beautiful biscuits. Will try them soon.