The door to our downstairs toilet has been a continuing sore point, especially for people new to the foibles of our house. The solid oak lintel was only 155cm (5'5") high, and was capable of catching all but the shortest people (you know who you are) unawares. 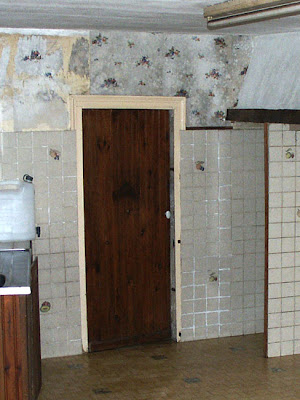 Not now. The door is now a regulation 208cm (6'10") high. Not that it stops me from ducking as a reflex action when I walk into the room. I was going to save a piece of the architrave off the old lintel, but it was so damaged (presumably by people's foreheads) that it wasn't worth the effort. 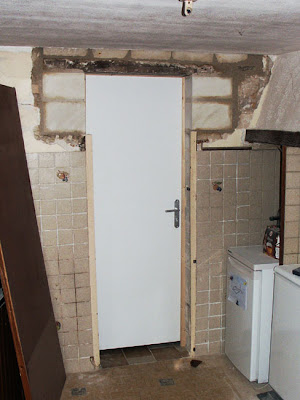 The masons have now finished their work on the house, or at least this round of works. We will post some more photos of what they have been doing later in the week. Stéphane and I are still rewiring (we hope the new tableau will be in action this afternoon), and then we will be starting work insulating and closing the walls of our new entry hall - a project I am very excited about.

This current round of works has so far taken three weeks, and we have got an awful lot done. Not that we are feeling smug, because we still have a huge amount of work before we are finished. Having said that - it now feels as if finishing is a real option - something we have both had private doubts about.

That's an incredible difference in height, looking at the two pictures. I don't remember being too concerned about banging my own head, though. Maybe it was just a problem for the vertically unchallenged !!

Jean: I could walk through the doorway without thinking about it, except if I was wearing my hair piled on top of my head - then the lintel would attempt to scalp me. I'm 165cm (5'5"). Uncle Geoffrey hit his forehead hard enough a couple of times that I thought we were going to have to take him to hospital. Simon is taller than Geoffrey and the lintel was chin height for him. Our two new doors are now the only ones in the house Simon doesn't have to duck for.