The first orchids have begun flowering around Preuilly. The very first patch is some Early Purple Orchids Orchis mascula (Orchis mâle in French) on the corner of the turn off to Rouvray from the D725, which I spotted on my way to the supermarket on Thursday. These were the first to flower last year as well.

The group of very sturdy and richly coloured
Early Purple Orchids on the Rouvray turn off. 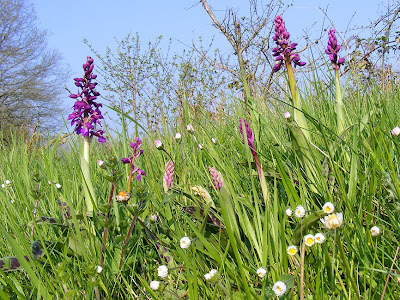 Only a day behind them are some Lady Orchids Orchis purpurea (Orchis pourpre in French) on a roadside bank at Pelchate on the western outskirts of Preuilly. 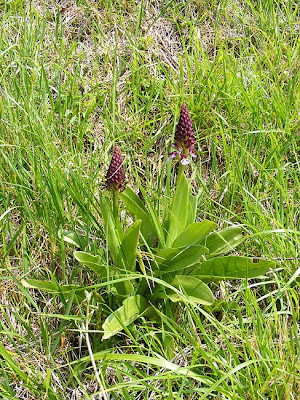 The Claise Valley, between le Grand Pressigny and Bossay-sur-Claise is by far the best orchid habitat in the département of Indre et Loire, with over 30 species. Orchid numbers, although not necessarily species, are generally much higher south of the Loire than north in the département too, with the Touraine du Sud being the main area of interest.

A closer view of one of the
Early Purple Orchid flower spikes. 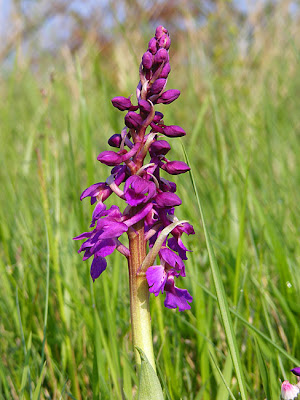 The orchid hotspot of which Preuilly-sur-Claise is the geographical centre is not particularly well known outside the area, overshadowed by the neighbouring Brenne in Indre, which has a couple more species and is famous enough to attract international orchid tourists. The main flowering season is May - June, when it is possible to see 25 species in a week if you know where to look. The two most productive habitats are damp grasslands and dry sunny calcareous banks.

More information about the indigenous orchids of the area can be found on our website Loire Valley Nature. A checklist of all the possible species is here, and thumbnail photographs arranged by month to help you identify any orchids you find are here.

Nice. We are more northerly and our orchids haven't yet bloomed here near Saint-Aignan.

The only orchids I've knowingly seen were Lady Slippers in bog- or swamp-like terrain in Michigan years ago. They were pale blue and very delicate. Lovely.

Nice website, thanks for linking it. I'll make note, as it's a good potential resource. And thank you for the orchids.

Interesting blog! We were to Preuilly-sur-Claise and visited the old church today. We are from Finland, but live this winter in Le Grand Pressigny!