A Day Out with Célestine

Célestine with Chenonceau in the background. 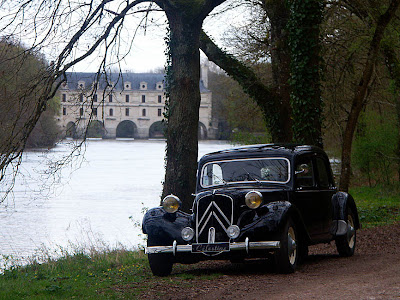 We went up to Tours in Célestine yesterday to meet Scott from New York and his mother Sally from Alaska for a day excursion while they are on holiday in France. They braved a train strike to get from Paris to Tours, and I hope they got back OK, as today is Sally's birthday (Happy Birthday to you, Sally). After the hustle and bustle of a few days in Paris they found it very pleasant to come to the peace and quiet of the Touraine for a day.


The gardens at Chenonceau are looking pretty. 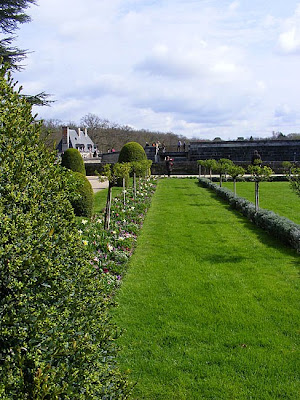 The predicted rain held off and we visited Chenonceau, lunched at Le Bonheur est Dans le Pré in Bléré (pronounced the best lunch they've had so far in France by Scott), then on to Clos Lucé in Amboise, Leonardo da Vinci's last home (where they've made a little Leonardo go a loooooong way!).

After that we dropped in to the Château Gaudrelle caves on the Quai de la Loire in Rochecorbon (Vouvray), which Sally loved. We tasted a range of 8 wines, from a dry sparkling white (€6/bottle) through to a sweet dessert wine (€18/half bottle). It was a most interesting lesson in how terroir influences wines because we had the opportunity to taste two wines made the same year, from the same grape variety, same age vines, growing only metres apart. These two wines were completely different, and the only variable is that the soil changes in those few metres from argilo-siliceuse (sandy clay, somewhat acidic) to argilo-calcaire (clay and limestone, which is alkaline). The dessert wine is made with grapes that are allowed to dry on the vine until they are like dried currants. Hence the sugar is very concentrated (140g compared to 3g in the still dry white). It's more expensive because the same quantity of grapes produces far less wine. After being shown the wine production areas we all bought a selection of wine and who should we bump into there but Jim Budd, the wine writer, who has also written about his visit on his blog.


Jim Budd (left) with Alexandre Monmousseau,
the owner / winemaker of the Château Gaudrelle
winery, with Scott in the background buying wine
from Alexandre's partner Eric Pasquier. 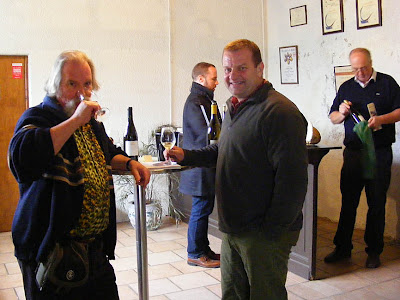 To finish off the day we went round the as ever impressive gardens at Villandry, then it was back to Tours so Scott and Sally could catch their train back to Paris.

And today, Alex is back to recommence work on the apéro terrace.

Email ThisBlogThis!Share to TwitterShare to FacebookShare to Pinterest
Labels: Food and Drink, Gardens and Parks, Pictures of Chateaux

So business is picking up. Good for you. Congrats.

The season has only just started and we are pleased so far with the level of interest. Certainly over Easter we would not have wanted any more work than we got - Célestine is an old lady after all.

And work too? I hadn't realised and hadn't picked up on it thru the blog. Other than living the dream, what do you do? Our passion is our truffle plot of 1000 French and English oaks. Maybe 2011 will see la truffe noir down under.

Andres - the tours are our work. As for living the dream - it will be, once we have electricity and plumbing :) At the moment is is sort of "living the proto-dream"

We are hoping to plant a couple of truffle oaks this year. We have the space and the right sort of soil, so they should do well.

The picture of Celestine with the chateau is really great! Very much of another era.