Recently we met Guy, who repairs cane and rush seats. He comes once a year to Preuilly and parks his camping car on the old municipal campsite by the (now sadly closed) Claise Restaurant. He puts up a sign saying he does 'repairs, rerushing, caning, regluing and springs for chairs and armchairs, pick up and delivery from your home' and sometimes calls door to door to ask if householders have any chairs they want repairing. He is fairly well known in the district and seems well integrated into Preuilly's annual cycle. He is a gypsy (the term he uses, by the way) and says he likes to keep things simple.

Guy's sign and a few chairs to advertise his work in front of his van. 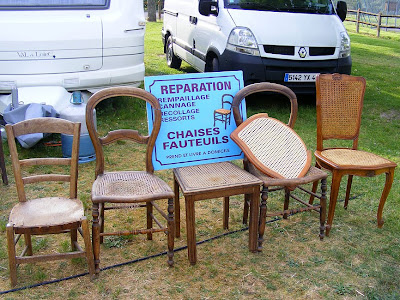 Cane and rush work is closely allied to basket weaving, which he also does. It seems these are traditional gypsy activities, because there are often gypsy women selling baskets at in the supermarket carpark in Yzeures. They come from the campsite provided for gens de voyage just down the road.

Guy's hands are rough and covered in lacerations from the cane. He just shrugs. His work is clearly very skilled and good quality, but he is careful not to get too proud of being an artisan, because that just leads to ideas above your station (or words to that effect). He says he has repaired chairs in all sorts of locations, from grand châteaux to a couple of chairs for a friend of ours.

Our friend's chairs (below), restored to useful life. Guy told her off because he could tell she must have been standing on them and he had to send the seat rails off to a local menuisière (joiner) to get new ones made, as the old ones all had broken dowels. 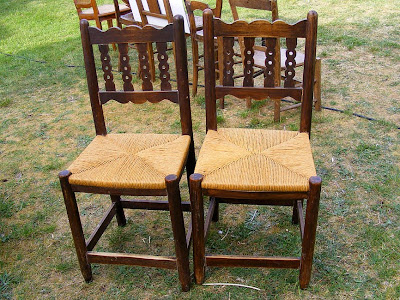 We were invited for apéro when our friend picked her chairs up and Guy explained that there are 4 or 6 thread weaves or methode anglaise, which is a 6 thread but with more complicated designs incorporated. Apparently he once did an armchair in Limoges in this method and it was a real challenge (and he didn't charge enough...) The chair was late 18th century, from India and decorated with nacre (mother-of-pearl), very rare and worth a fortune.

He says it's difficult sometimes to convince clients that his fee is reasonable. Sometimes there will be someone at their local market who will do a chair seat for €50, but he warns that you will be wasting your money and only have to get it done again because the workmanship will be so poor. He showed us a neat and pretty rattan basket that he was asking €25 for, but his competition are sourcing their wares in China and selling for €5. Sadly, the punters don't care or can't see the difference. He has a number of English clients, who he likes, as they are happy to pay €250 per chair.

Likewise, corners are being cut with the materials. It used to be that the artisan prepared the material he used from scratch. If he was working in osier (wicker) he would peel and soak the withies to whiten them, or dye them as required. Now you buy the material ready to use. The whole withy would be used, but now the method is to cut the withy into three strips.

As with everything, you get what you pay for - although I would be nervous of dealing with someone who is a "traveller". Our experience of these people in the UK is very negative.

Jean: Guy says his experience of non-gypsies is often negative :-) but you are quite right - I would not have visited the camp if not accompanied by someone who has known him a long time and who I like.

Guy also says that travellers are different to gypsies (aka gens de voyage). According to him, travellers have the outward trappings of gypsies, but none of the cultural or social traditions. He gets on well with them, but it concerns him that their social infrastructure is completely lacking, unlike true gypsies, where family connections are extremely strong and the rules of remaining in the community strictly enforced.

Well, he certainly does beautiful work. it's hard to find anyone that does this in the States.