The Queen of Spain Comes to Visit

Our potager has a great many weeds and wild flowers, which mostly I just let be. One of the prettiest is the Wild Pansy Viola tricolor ssp curtisii (la pensée sauvage in French), growing in abundance around the compost bin and under the nectarine. I've left them to grow and multiply because they are so attractive, aren't doing any harm, and I knew that they were the larval food plant for several species of Fritillary butterfly. 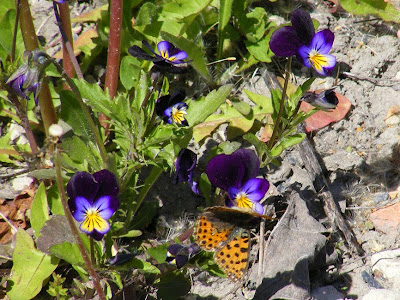 A couple of days ago we were rewarded by being able to photograph the Queen of Spain Fritillary Issoria lathonia (called le petit nacré in French) showing great interest in the Wild Pansies, inspecting each one carefully, and we think, laying eggs. 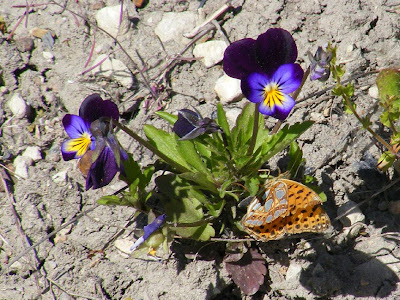 The Queen of Spain Fritillary butterfly is common around here, on the wing from March to October. They like crop margins and flower rich grasslands, flitting jerkily about and often not easy to photograph.

They can be easily identified by the large mother-of-pearl spots on the underside of the lower wing. The upper wings are orangey brown, with regularly placed black dots.

Hi Susan,
do you know which kind of butterfly is having larvaes in cultivated (not wild) pensée? I have found some of them on my balcony eaten by a larvae (around 4 cm long)... Thanks!

Katarina: You are in Paris I think? My first guess would be some sort of moth, but I can't give you any idea what sort. It could be one of the Viola loving Fritillary butterflies though. Is the caterpillar black?