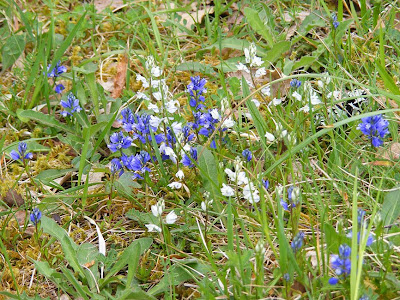 It's not just orchids flowering in the grass that attracts one's attention. This little plant is called Milkwort Polygala spp, and likes the same habitat as many of the orchids in the Claise Valley i.e. dry banks of short grass.

It's called milkwort because it was believed that if cows grazed it they would produce more milk. This is probably an example of sympathetic magic, as the inner part of the flower is fringed, perhaps invoking an udder.

Could the flowers be a paler or darker shade of blue, or are they only white or blue?

In any case they're lovely

Occasionally they come in a shade of maroony-pink as if someone had spilt magenta ink and tried to clean it up.
The pink version can be seen near Chaumassay but seems to appear slightly later.... the Heath Milkwort has all three colourways visible at the same time on different plants and is a smaller flower... I've seen these near Bellebouche in the Brenne with X-leaved Heath and the red-tipped Cladonia lichen... a very pretty site.

How annoying - I left a comment last night and it has disappeared!

CHM: The flowers can come in a range from white through pale blue to really intense clear blue.

Tim: These are Common or Chalk Milkwort, I'm not sure which, because I can't tell from the photo and I didn't look closely enough at the plant at the time.