Lady Glanville has the Last Laugh

Posing on a plantain flower. 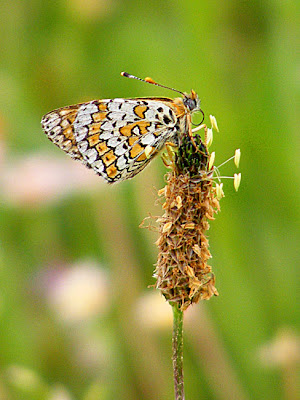 Our orchard is home to a good population of Glanville Fritillary butterflies Melitaea cinxia (la Mélitée du plantain in French). In April I had to be careful not to tread on the caterpillars as they munched their way through the Speedwell Veronica spp (our Glanville caterpillars seem to prefer the speedwell to the Plantain Plantago spp, although I have seen them on plantain as well).

The distinctive caterpillar with its black body and red head. 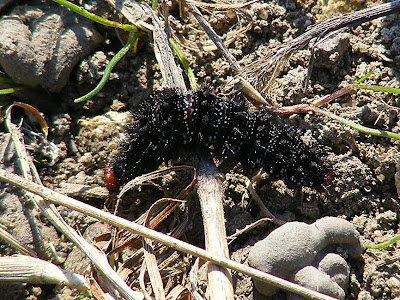 I particularly like this butterfly, not least because there is a nice story attached to its English name. It is named after Lady Eleanor Glanville, a 17th century English aristocrat and one of the first people to seriously study butterflies. Parts of her natural history collection and correspondence still exist, kept in the Natural History Museum in London. When she died, her son tried to overturn her will on the grounds that no sane person could be that interested in insects, and therefore her will, with which he was disappointed, was invalid. 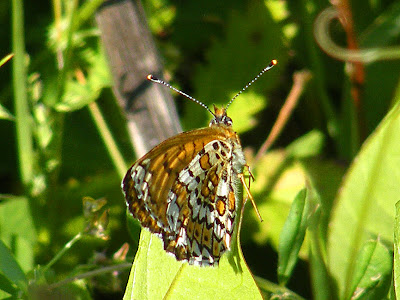 On cool days they will pose on flowers for a considerable time, but once the weather warms up they are amongst the most difficult creatures to photograph, flitting from flower to flower and zig-zagging across the top of the grass. 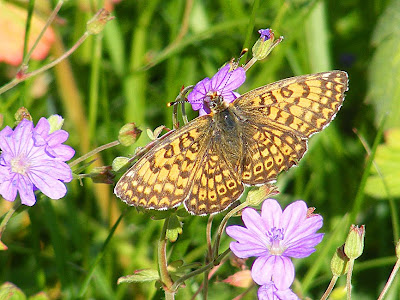 They are common in the Touraine, on the wing from April to September. 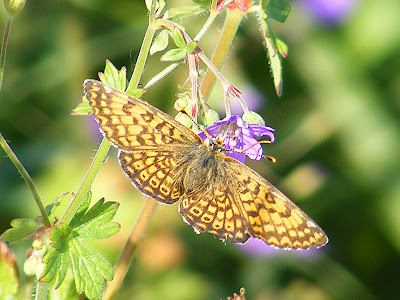 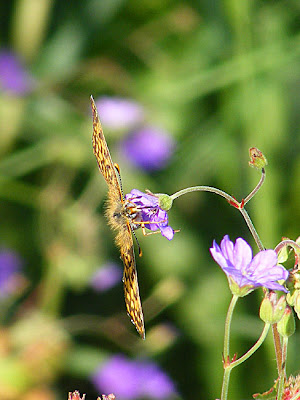 Never knowingly seen these, YET, Susan.... look forward to it... the underwing is marvelous. May have seen them in flight though [from reading your post]... the catterpillar looks quite strange... are those wormcasts beside it?

These photos are amazing. You must have incredible patience.

Tim: They do a similar flap-flap-glide action to Tortoiseshells, so it is likely you have seen them, but assumed you were seeing Tortoiseshells. The cast like objects in the picture are rocks. I don't know enough about geology to know what they might be called.

Kirstie: There were a lot of photos of where a butterfly had been, before I got these. Nowadays I'm better at predicting what they will do next, so the photos are better.

Did you catch the article in the Chronic about me? And are you planning to call in on us later in the year? It would be nice to meet, as I enjoy your blog very much as a reflection of my own former life.

Gorgeous pictures but I particularly like the last one.

Nadège: I like too, and decided to include it even though it is completely useless in terms of being able to identify the species.

I'm with Nedege on this - there's something very special about the last picture. They're all great, though. Thanks for sharing these.

Those are excellent pictures, quite beautiful. Is this a butterfly found only in Europe? I've never heard of this one in North America.

Yes, they are gorgeous pictures. I see these butterflies all the time around Saint-Aignan.

Emm: It's a European and temperate Asian species only.

Ken: You've taken some lovely pics of these butterflies.

Yes ... I have seen these in our lane but impossible to photograph. Now I know their name. Very interesting post.