Bio in French is short for biologique, and is used in the same sense as 'organic' is used in English to describe a farming and food production philosophy which eschews the use of synthetic chemicals to control pests and diseases in agriculture, animal husbandry and artisanal foodstuffs.

From left to right (and missing out some people whose names I don't know) there is Simon (camera), Guy (beard, at the back), Greg (pork pie hat), Aurélien (cap), Laurent (beard and topknot on the right). 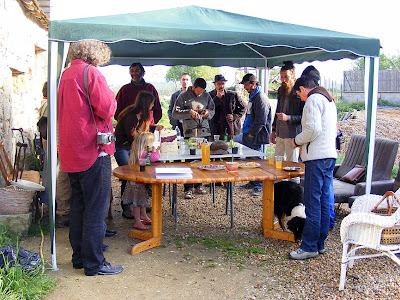 We were invited to attend a meeting and information session of organic farmers on Tuesday night. A group of them have set up AMAP Chèvrefeuille (Association Honeysuckle), to combine their marketing and sales. AMAP stands for 'association for the maintaining of traditional farming practices' or association pour le maintien d'une agriculture paysanne. The meeting was held at Joe's farm, la Pouillère, between Preuilly and le Petit Pressigny. The weather was terrible, but we enjoyed apéros and the group discussed tactics. There was apple juice to drink and the nibbles were some fromage blanc with herbs to spread on crackers, dried apple rings and some saucisson with nuts made by a friend of Joe's over at Tournon St Martin. The saucisson was particularly good, made from an old breed of pig, half wild half domesticated, called Cul Noir (Black Bottom). They are slaughtered at 2 years.

Saucisson made by Fred Gagnot at Tournon St Martin. 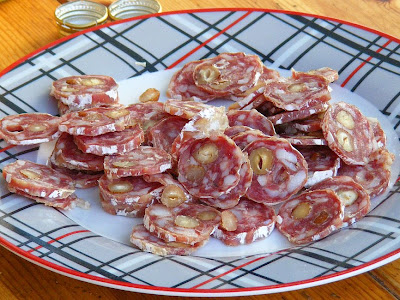 Joe produces vegetables and goats' cheese. Last year he started a small scale box scheme, and this year says he hopes to produce 20 boxes of mixed vegetables a week from mid-June to the end of October. The boxes contain 5kg of vegetables (aubergine, topinambour, concombre/cucumber, melon, poivron/sweet peppers, etc) and cost 15€. Subscribers pick them up on Thursdays. Joe's goatshed was damaged in the tempête, losing its roof, but cheese production started two months ago. He had hoped to be producing the first vegetables by mid-May, but the cold weather has delayed everything, and now he is saying mid-June.

Baker Laurence is going to come to la Pouillère on Thursdays too, so you can buy bread and pizzas from 18.30 onwards.

Beef and veal producer Aurélien is going to let everyone know when he has meat available. He raises grass fed Limousins. I learnt from him that the auburn colour of their coat is known as rousse, and that haylage is called enrubannage in French. His veal is slaughtered at 6 months and costs 14€/kg. The meat of the cows is 11.80€/kg. Both can only be bought in bulk, in 10kg lots.

Joe is going to ask Angélique, who has a stall selling organic groceries at Preuilly and some other local markets, if she will come by once a month, to widen the range on offer.

Greg brought some of his younger snails along. In the background some dried apple rings from the Durands. 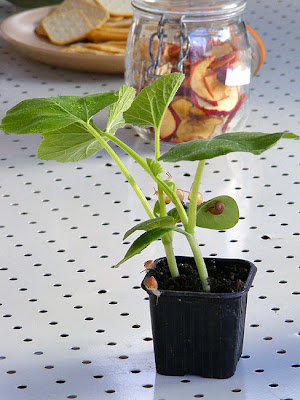 Also at the meeting was Greg, who has started France's first organic snail farm; Magali, a potter who is going to design and make some butter dishes for Joe; Laurent, a WWOOFer, who goes from AMAP to AMAP providing volunteer labour in return for accommodation and meals; and Guy and Mme Durand, with their apple juice.

We happened across a bio market once somewhere, selling everything from meat, wine and cheese, to organically made socks!

The wine we bought there was super but we have no idea where it was.

Jean, there's a lass who now comes to the GP weekly market selling bio ingredients and v. occasionally veg [possibly just at the moment, we'll see as the summer comes in]
Susan... that sossij looks absolutely scrummy! Were the dried apple rings as good as the ones at the party? And did they use a dehydrator or the power of the sun?

Tim: that lass is Angélique, as mentioned above, so if she has veg, I imagine it is Joe's.

The dried apple rings were not as good as yours. I wanted to ask how they had dried them, but didn't get a chance / forgot, so I don't know.