A couple of days ago a friend rang to say she had a large moth laying eggs on her front door. Did I want to come over and take photos, as it looked like the moth was going to be busy for a while?

Since I was just about to start the washing up, there was clearly no alternative but to drop that task and rush over to Louisa's. 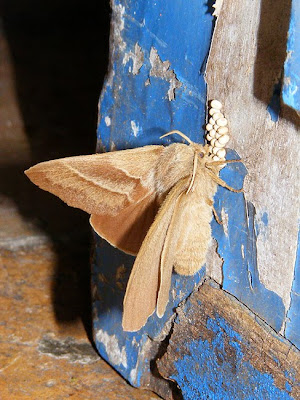 The moth turned out to be a Fox Moth Macrothylacia rubi (called le Bombyx de la ronce in French). It's a member of the Eggar family of moths, which tend to be large, furry and foxy coloured. Like most Eggars, the female Fox Moth is larger and less orangey than the male, and more grey.

Fox Moths are widely distributed throughout France and the adults are about from May to July. Males tend to fly on sunny afternoons, but females are much more nocturnal, and although this one was laying mid-morning, they usually lay their eggs at night. Usually they are laid on vegetation or twigs rather than doors, too.

The caterpillars eat a remarkably wide range of plants - brambles, strawberries, raspberries, alfalfa, clovers, blackthorn, potentillas, calluna, heathers and roses. They live communally, protecting themselves with a web and hibernating through the winter. The dark hairy caterpillars can be mistaken for the dreaded, but unrelated, processionary caterpillars, which have severely irritant hairs (similar to stinging nettle or poison ivy). The caterpillars of the Fox Moth can be picked up and handled, although if you are susceptible you might find that they give you a bit of a rash. The caterpillar wont be too impressed either to be picked up, and will form a coil in self-defence.

NB The species of processionary caterpillars that are dangerous to touch only makes its web in pine trees. The webs are much bigger and very visible compared to the webs of communally living eggar moth species, who generally choose a broadleaf species.
Posted by Susan at 09:00

These poor little chaps will be well worn out by the time they find something to eat, any distance at all will be huge to something so tiny when they hatch.

Yeah, I was kind of curious. Does she plan to leave the moth eggs on her door? Can they be moved someplace better for the caterpillars and the homeowner, or does moving them kill them?

Susan... they've done this twice now on the doors to the longere... as Abbeysmum says they have quite a way to travel [including across two foot of concrete] to find the lawn, let alone any of the food plants listed... even if they eat their 'eggshell' first [which they must do as the site on the door last year was protected from wind, rain and light]. Could it be that they hatch at night and can gat to the fairly safe grassy sward at the coolest time of day?

In the last two nights, we have had masses of moths attacking our verandah window and they are all different. I have been thinking that they are Hawk, Tiger or Gypsy Moths. Some are HUGE, so perhaps they are Fox moths which I am not familiar with.

Tim: looks like, once again, the field guides need rewriting with regard to behaviour of wildlife in this region. I think it is likely they hatch in the very early morning, just pre-dawn. This is very common for creatures that emerge en masse.

Sweetpea: You could have any of the Eggar species and a multitude of others, but if they are really huge (bigger than 10cm across), then I think you probably have Giant Peacock Moths. BTW, the rule of thumb for non-professionals judging the size of wildlife in the field is to divide by 2 or 3. People almost always greatly over-estimate how big an insect is if they are not experienced.

Agree with you entirely about the guides... most seem to need to be rewritten before they are published as continued study changes facts almost daily. Dawn seems right to me too, dew on ground, cool, lizards likely to be tucked up in bed... only the early insectivors to watch out for.
Or, looking at the bottom of Louisa's door, perhaps the moth thought that there was a good chance of it being 'at the bottom of the garden' before the eggs hatched. The topmost eggs, also, look to be in grave danger of being rubbed orf! Something definately abrades the door along there.

Tim: Well, Louisa was worried that one of the cats would spot the moth and eat it!