I had hoped that we would be using the new bathroom by now, but it looks like it may be a week before that happens. This is because we have encountered one or two delays, the latest of which is the floor.

The floor on the 1ème etage is wood, I had always thought (or hoped) that it was waxed chestnut, mainly because of its dark colour. It was difficult to say though - there was so much stuff on it: wax, grease, dust, water stains, paint drops...

By Tuesday Susan had finished painting the walls and ceiling, and we removed the sheets of cardboard we had put down to catch the drips. This gave us our first opportunity to check what the floor was made of - it just hadn't occurred to us before then. What we thought was chestnut with a thick layer of wax turns out to be pine, with a thick layer of wax over polyurethane. I experimented on the patch of floor that will be under the shower with various solvents as to the best way to clean the boards: vinegar, vinegar with cream of tartar (an idea taken from a page on the internet), white spirit, paint stripper, and paint stripper especially bought that is supposed to remove polyurethane. All of these products cleaned the floor, but didn't get us down to bare wood, leaving me with only one option - sanding.

You can just about make out the bit I have done. 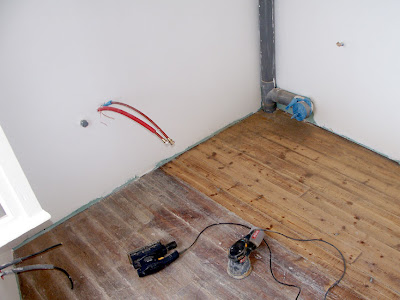 Because the room is so small - about 5 sq meters - we decided it wasn't worth hiring a floor sander, so I set to with a hand sander. It isn't fun, and it adds a whole new strata of dust to our collection. It also introduced a new problem to the mix: the floor has had worm at some stage in the distant past, and not only has the sanding made the holes more obvious, but it has also exposed a lot more of the damage. It has also revealed the fact that at some stage the floor has been sanded across the boards, leaving deep grooves. 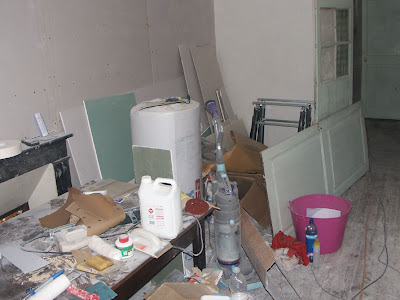 Our next problem, and one we hope to solve today, is how to treat the floor now. As I see it, we have four options: follow our original plan and treat the bare wood with an oleofuge/hydrofuge solution, varnish with a couple of thick coats of marine varnish, paint or stain the floor and then use marine varnish, or board the floor and lay either vinyl or tiles.

Neither of us really like pine, but although we can't deny the boards have character at the moment we are tending towards the paint/varnish option. I figure (or hope) that we don't need to get too paranoid about it being a bathroom with a wooden floor as we are putting in a large shower cubicle and no bath, so we dont need to put down a completely waterproof floor.

The best product for wood bathroom floors is a waterproof polyureathane lacquer from Bonakemi http://www.woodenflooringsales.com/bonakemifloorlacquers/

Or you could use lino... Marmoleum comes in a huge range of colours and is a natural substance. A company based in Chatelleraut... Decorial/Geant Moquet/Muresol [don't ask... all three names are present on their signage and letterheading]are supplying and fitting ours.... but they will supply only quite happily. The reason we are getting ours done is that we are wider in the bathroom than the 2metre roll width and it needs someone who can do the invisible cold-solder down the join!
Else I'd lay it myself!!! Much cheaper when you look at the devis...

We are having a wooden floor in our bathroom too, we have seen it elsewhere and really, how much water gets on the floor when you have a shower cubicle. So that's my vote and I think the pine will look pretty good against white fittings but you could stain it. Keep up the good work :)

Sounds like it will be great when completed! I'm new here and can tell I will enjoy reading your blog. Love the area where you live!

I have a friend that has a house built in the 30s. Her bathroom has wood floors (also pine I think). They have a coat of linseed oil with verathane (water based) on top. They look great.

That said, I think painting the floors will also look great! You two are making lots of progress.

A few ugly scratches add charm and character, so go with it.
But oh dear, more dust !!

M.Proust. Thanks for that. What a pity that it costs twice as much in France as it does in the UK - AND we would have to wait 16 days for delivery!!

We have decided to paint the floor a soft blue-grey colour, then polyeurathene it because after I had finished sanding, the wormholes and assorted other damages were just too obvious.