On Thursday Susan and I gave the bathroom its first coat of undercoat, which was quite a momentous occasion for us. We have been slinging paint around since just after we bought the house, but this was the first time we have painted any walls properly for permanent finishing.

Yesterday Stéphane arrived to help me with the laundry. Unfortunately all the plaster dust of the past few days has made me feel really unwell, and I was in no state to come out and play. However, by the time he had measured everything I had surfaced and was upright enough to help.

I thought we were going to be doing frame for insulation, but I hadn't bargained on Stéphane's penchant for doing things properly. Thus, it was first things first, and the first thing in this instance was the laundry window. The old laundry window was a cut down door that was on its last legs (truth be known, it was probably on its last legs when Napoleon was playing goalie for St Helena FC). We had bought a new window at BricoDepot, but due to a certain amount of naivety I had bought a window that was too big: window measurements are stated in the size of the opening, not the size of the frame. 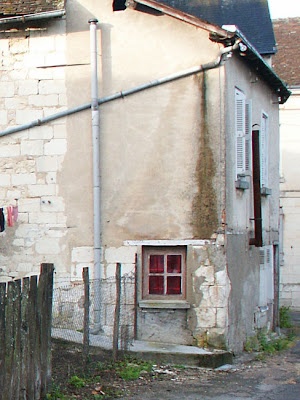 Our first task then, was to enlarge to hole so the window would fit. Usually I do demolition, and I do it in "bull in china shop" mode. Stéphane is more methodical, so the hole grew to the size we wanted, rather than mysteriously becoming monstrously big and having to be partially filled in. 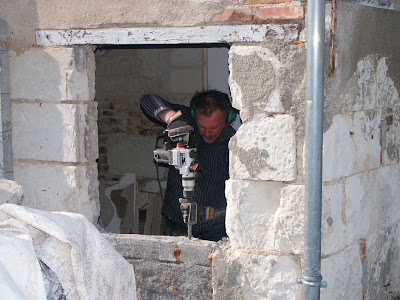 Then we built a window sill, and by knock off time the window was in - albeit with more work to do to make it water and wind proof.

Today is May 8, so at 10.45 we will be gathering at the Mairie to remember the coming of peace to Europe, and the sacrifices that were made in bringing the peace about.