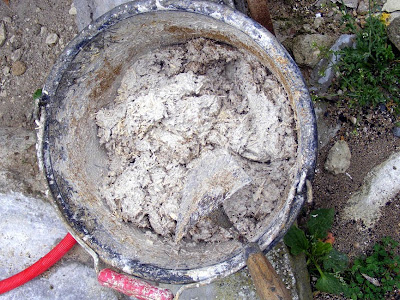 You will be forgiven if you look at the above photo and think "hmmmm grey horse poo" - mainly because in days past horse poo would have been an ingredient. What you are looking at is a mix of chaux, sable et chanvre.

We wrote a couple of weeks ago about replacing the bathroom window, and having to enlarge the hole it was going into because of a misunderstanding on my part about window sizes. We managed to get the new window mounted in the hole the same day, but there were one or two holes in the stonework around the window where the tuffeau had broken.

Yesterday Stephane decided we would fill the holes in the almost traditional manner, using chaux (hydrolized lime mortar). The break with tradition comes with the material used to provide insulation and reinforcing: traditionally this would have been a mixture of animal hair (goat or horse) and not to put too fine a point on it, poo. Usually horse poo, because horses have really inefficient digestive systems and the grass (or hay) gets processed without the fibres being broken down. Instead we used the modern and very trendy equivalent chanvre - hemp.

The new window in place. 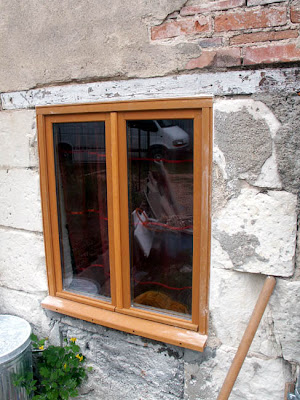 Preuilly sur Claise has a long tradition of producing and processing hemp. We have written before about the Moulin de Chanvre, which just outside the town. These days hemp is bought heavily compressed in large plastic bags, and is used on interior walls (and sometimes ouside walls) as an insulating material mixed with mortar.

Is grey horse poo a different color from black horse poo, or sable horse poo for that matter? And what if the pony is brown and white?

Very nice looking window, by the way. Sorry to be a pane...

Simon, I'll have to swop a lesson or two for some of my birthday brew!
Or a bottle of wine?!
I can do un-reinforced mortar... but haven't tried using hemp straw... we are going to use the hemp/chaux blocks inside the barn for our utility area and I'd like to plaster the outlide view in a traditional way. Did you or Stephane do the hard work?

The window looks great! And I'll take chanvre over poo any day...

Walt: Us old bush trackers can tell. It's just a knack we have.

Tim: As far as I am aware it's the same mix of lime water and sand with added hemp. I have a feeling that you can't use it as a final coat and that you have to put some sort of finish - chaux or limewash (which is just weak chaux anyway) over the top to seal it.

Hipersin is what takes you straight to hell, I'm told!

Did you get your hemp from the source- somewhere near Preuilly sur Claise? Or have you bought it at a brico? We need a lot of the stuff for isolating our old walls, and we live at a resonable distance..(are curious about the price to)

Bene est (nice nick!) I believe the hemo came from a brico - because we needed so little we just grabbed half a bucket load from what Stephane had left over from doing his own walls.

Next time I see him I will ask him where it came from.