On Sunday we went to the Fête des Plantes at the Château de Verneuil-sur-Indre. The Château is a horticultural school and the students are disadvantaged teenagers, many of them refugees from war torn African countries. We have met a few of the students through our neighbours Sylvie and Pierre-Yves, who home host two students most weekends. Last weekend Isaac (who is from either Congo or Mali - I forget) asked us if we were interested in going their fête so we said bien sur ! on sera là - voir vous dans la serre.

Inside la serre (the greenhouse) full of baby plants. 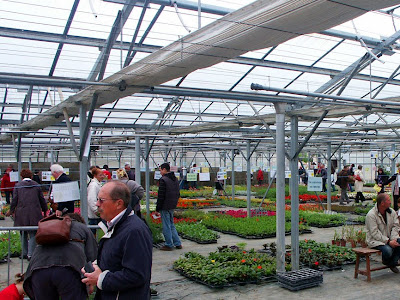 We had been told that the annual plant sales at the château were not to be missed, as the range of plants was extensive and they were good quality and not expensive. This proved to be the case for the horticultural school's plants in the big greenhouse - mainly bedding and vegetables ranging in price from 50c per plant to 1.50€. The independent nurseries, with stalls along the front driveway, had good stocks of shrubs, fruit trees and bushes and perennials, mostly not outrageously priced, although the people selling 2l pots of snapdragons for 10€ were having a laugh.

A nice pointy bit of the château. 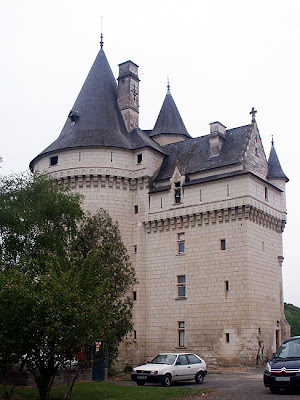 I bought a mixture of salvias and petunias to replace my tulips and hyacinths in the courtyard. The bulbs will be relegated to the potager for a rest, and the front court will be a cloud of vibrant blues and reds for the summer I hope (and not a pelagonium in sight...)

Plant stalls along the driveway of the château. 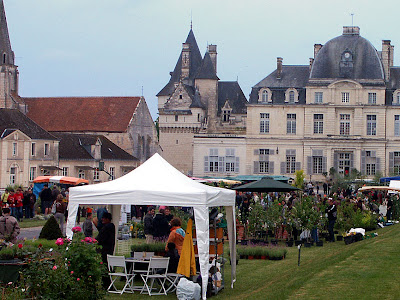 The Lycée horticole et paysager privé Sainte Jeanne-d'Arc Fondation d'Auteuil Centre-Bourgogne has been going 75 years in Verneuil. It is one of 200 similar establishments throughout France which grew out of an earlier charitable organisation run by the Catholic Church known as the 'Orphan Apprentices of Auteuil'. It's mission is to help and protect young people in difficult life circumstances to get an education and to integrate into society. The organisation is keen to recognise individuals' aptitudes and provides vocational training such as here at the horticultural school.

Email ThisBlogThis!Share to TwitterShare to FacebookShare to Pinterest
Labels: Events, Gardens and Parks, Loches and area, Pictures of Chateaux

I would LOVE a plant sale like that in France, even though I couldn't bring any plants back with me. It would just be fun to window shop.

Looks like this will be something to do each Spring as you get your home and orchard planted out the way you plan.
1 Year there already ! happy moving aniversary.
Did all of the plants brought over from U.K.survive the year ?