Bee Orchids in the Orchard

By mid-May it was clear that we had far more species of orchid in the orchard than I had expected from the rosettes of leaves that popped up in the autumn. Neither of the species I expected then have materialised, but what we have is just as good.

A Bee Orchid with a well developed bud spike. 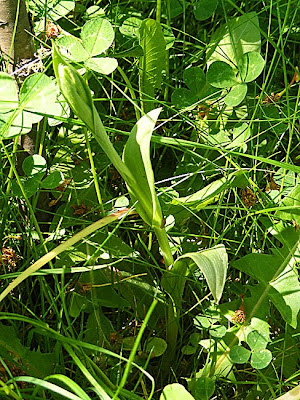 There is a substantial colony of Early Spider Orchids Ophrys sphegodes (Ophrys araignée), which were the first to flower, along with a single specimen of Lady Orchid Orchis purpurea (Orchis pourpre). Some weeks later, Bee Orchids Ophrys apifera (Ophrys abeille) started to flower in nearly as great a number. We had to transplant some orchids because they were in the way of the over-engineered grape vine trellis and at least one of these (which we had removed to the safety of our back garden) turned out also to be a Bee Orchid, which is now flowering quite happily.

There was also a single tiny specimen of Greater Butterfly Orchid Plantathera chlorantha (Orchis verdâtre), which was just about to flower when it was hit by a late frost. The flower buds turned brown, but the leaves are unaffected, so with luck it will return to flower next year.

Bee Orchids are the prettiest of the
wild orchids in the Touraine, I think. 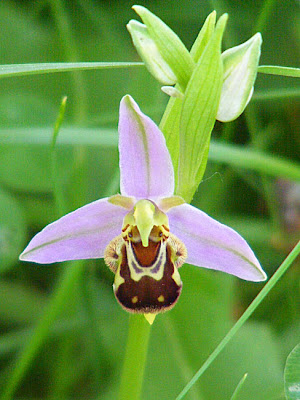 It looks like we've got a Pyramidal Orchid Anacamptis pyramidalis (Orchis pyramidal) coming too, sending up two flower spikes full of close packed buds. Other rosettes are preparing to flower, so it's possible we may get even more species by the end of the summer.

Of course, this all depends on the weather being nice - which at the moment it isn't. We even had to light the fire yesterday.

Did the previous owner mention
this little orchid gold mine to
you,or was he a mowing fanatic
like so many men? The bee orchid
photo made me catch my breath.
Do you have to wait for the
leaves to die back (like daffs)
before cutting?

Sheila: The previous owner was very keen on mowing and on roundup. I doubt if he knew they were there. I do have to wait for them to die back before mowing, but they disappear very quickly after flowering.

Susan,
Can I come and cut some of your meadow? I am going to do so at our friends in Chaumassay but could do with some from yours too if there is an area that you can let grow on for a while.... orchids not as important as a good mix of flowering species inc. grasses.
It is for thos areas of nettle that are all over our meadow, I want to a] glyphosate and b] scorch those areas with our flame thrower and re-seed with native species. I cannot find anywhere that does native seed in France!
Perhaps they ain't bovverd!

Tim: Bien sûr. When do you want to do it? I'm planning to mow half of it tomorrow, but I can easily leave a section for you.

You could try asking the Conservatoire de la Patrimoine Naturelle if they can suggest a seed supplier. Otherwise Tony Williams or Chris Luck might know, but I actually think your plan is better. You'll get guaranteed locally sourced and conditioned seed, and species in the proportions they occur naturally.