Yesterday I picked 2kg of cherries. It's that time of year again and I have to think of clever things to do with cherries. The first of our cherry trees has a good crop and is starting to drop fruit. The others are still green or at best starting to yellow. But just one tree with ripe fruit means I will have to do something with cherries every day for a while.

Since we have several trees, the harvest can seem unending and overwhelming. Last year we made coulis and confiture, clafoutis and compote. As well as the sweet recipes, I thought I would try my hand at a cherry sauce for use with meat dishes. Simon's ChilliCherry Sauce was good, but I thought I would aim for something sweet and spicy rather than sharp and hot. 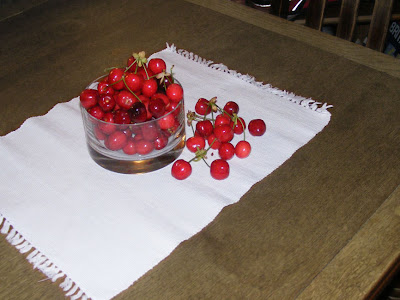 Pluck the stems out of the cherries and squeeze the stones out through the stem hole. Discard the stems and stones, retain the cherry skins, pulp and juice. Put the onion, garlic and ginger in a saucepan with the wine and boil until the wine is reduced to about a tablespoon. Combine the cherries and juice with the rest of the ingredients, add to the saucepan and bring to the boil. Reduce the heat and simmer uncovered for about 45 minutes, stirring frequently, until the mixture thickens to a sauce consistency.

The resulting sauce should be good with duck, pork, chicken, fish, kebabs, prawns...

Some notes about the ingredients:

The cherries I used are the early cropping ruby red sour cherries known as guignes. They are small and fragile, and we have discovered that stoning them in the way described above works best. Cherry pitters are really designed for bigger tougher skinned cherries. These cherries have a natural spiciness which, along with their acidity, combines well with wine and rich meat. I find it is best not to over sweeten them, and to play up their flavour with some zingy spices like ginger and chilli.

The wine I used was a typical Touraine sauvignon, a couple of years old and costing 2-3 euros at the supermarket. Nothing special, the sort of thing that actually isn't very interesting to drink so you might as well cook with it (or add a dash of homemade cherry syrup and make kir at apéro hour).

The honey was a mild but delicious miel de thym (thyme honey), purchased from our local chèvre producer, who sells it on behalf of an apiarist from the other side of the Brenne, near Buzançais. 1kg cost about €8.50.

The garlic was from one of the fresh new season bulbs from the warmer south that start appearing at the market in June.

Ha, cherries ... they bring back happy memories! Remember last year's meal at La Ferme des Bournaichères where we had cherries for dessert, while you didn't even know what to do with your own 'crop'?

Martine: Indeed :-) and I still have some of last year's crop in the freezer. Today I dealt with my first 3kg of this year's crop by making clafoutis, stewing, eating handfuls fresh and giving some to our French teacher. I attempted to give some to the plumber too, but he has an enormous tree of his own.

Ours aren't ripe yet. Strange. But the sauce you made sounds great. I'm going to try it.

Very creative cherry concoctions. I wonder if balsamic vinegar would be worth trying in some future mixture.
Could you sell your preserves at market? Perhaps with a sideline of your wonderful photos? You could sell out of Celestine's trunk, artistically decorated with straw. I can see it now.
Thanks for you good touring suggestions, Susan.

Ken: Only one of our 7 cherry trees has ripe fruit yet. None of the guignes are ripe and none of the dark cherries. This one is like a larger firmer guigne, somewhere between an eating and a cooking cherry.

Jocelyn: good suggestion re the balsamic. Making enough preserves for a market stall is just too much work I'm afraid. My pleasure re the ideas for historic house visits.

Popping over from Ken's blog to check out your cherry sauce - I just looked at the pics he posted of the sauce he made from your recipe ...

Hello Susan,
I'm another blog friend of Ken's. My Montmorency cherries are ripe and the birds haven't gotten all of them this year, so I going to try out your sauce. Hope to meet you some day.

Ellen: Nice to see you here and if you are ever in Preuilly, do drop in. We have 4 sour cherries which I have just started to pick. The pigeons like them, but hardly make a dent we have so many.

Lisa: It keeps for at least six months in the fridge or cellar - probably longer, but it doesn't get the chance here because we've eaten it by then. It goes fantastically well with camembert and many other cheeses.