This is our one thousandth post on this blog.

This means that since the 20th August 2006 Susan and I have shared over a thousand thoughts, because some days we have two thoughts. (Some days I have no thoughts at all, and just post a photo, so it probably evens itself out). The blog was originally intended as an open letter to our families so that they knew what we were doing even if we did forget to tell them individually. Since then it has grown somewhat...

In addition to the thoughts, we have shared 2,392 photos and a number of movies. These have been seen by over 148,000 people (which in itself is a scary thought).

We don't have any pictures of me thinking.
This was taken in May 2008 when we visited
the Venise Verte near Niort with Susan's parents 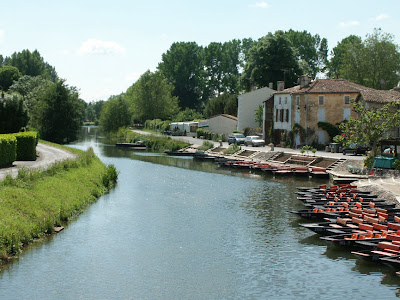 When we first started blogging we were worried we would end up sharing our innermost thoughts with the world and upset someone. So far we have avoided this, by the simple expedient of not talking about people we until we have asked them if it's OK, not being political, and not talking about religion. (I guess that means we have acted on the internet the same way we would hope to act in real life.) Hopefully this hasn't cramped our style too much, or reduced the blog to blanditudes.

We have learnt a lot from blogging: many of your comments have taught us stuff, or led us to new people and places. We have also met lots of new people and made new friends (who I won't mention by name, just to spare your blushes, but you know who you are), as well as a number of very kind and helpful people in Preuilly itself: some French, some English, but all who seem to be pleased we are writing about their town.

Susan may have been thinking in this photo,
taken with her parents in the Venise Verte 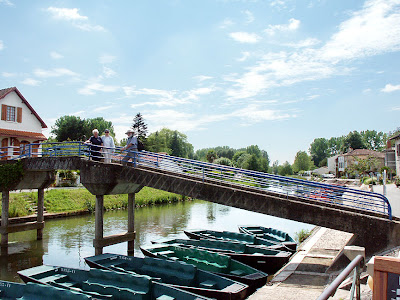 We hope that if you read our blog that one day you will be curious enough visit Preuilly (certainly I know the Maire hopes this!) and spend some time in what we think is a little hidden gem of a place. We don't appear in any of the major guidebooks except the Michelin Green Guide to the Chateaux of the Loire, so we are mainly unspoiled by tourism. Which in a way is nice, but I know the businesses in town would welcome you with open arms.

I entered this site by chance, but I found very interesting. A greeting to all the people who visit this page.

I enjoy your blog very much and found it through Walt and ken's blogs. For me, it is a bit of a "how to set up a life in France" blog. Perfect, as my partner and I hope to retire in France (if property prices in the US ever recover). I learn the occasional new French word here and really enjoy the gardening posts, the construction posts and the travel posts.

Thank you for sharing. And happy one thousandth!

Congratulations and thank you for your sweet blog. I found you through Walt and Ken. For me, reading blogs help me reconnect with France but I also learn a lot, looking at my old country through someone else's eyes. There are a lot of "gems" out of the usual touristic spots, that make "la douce France" and Preuilly is one of them.

I found your blog about a year ago when we received details of a house we subsequently bought in Le Petit-Pressigny. I put the village name into a web search and your blog came up.
The blog is varied and so very interesting. Keep up the good work!
How was the concert?

Gayner - we rang to book and found out that the concert has been resceduled for September.

Schnitzel and the Trout said...

I have been following your blog quietly for about 2 years. You do well in describing your life in France. I enjoy reading very much.

I have learnt a lot from both of you also, including la Célestine.
Awaiting to read and enjoy the next 1000.
Congratulations.