I know I have said that already this year (a couple of times even) and I will probably have to say it again, but the weather has turned springlike - three weeks before summer is supposed to get here.

Today we went to Chatellerault to buy items for the bathroom. You know the kind of thing: toilet roll holders, brushes, soap dishes and the like. To get these we went to Mr. Bricolage, which is a slightly more upmarket shop than Bricomarché, but not quite a posh as Leroy Merlin (maybe). When we got there, a surprise - it is Mr. Bricloage no more, but has transmogrified into Brico Chatellerault. This has only happened in the last few months, and neither the paint job nor the signage is spectacular, but the shop still had the stuff we need so all is still ok. 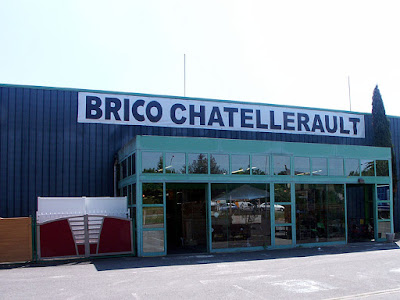 While we were in Chatellerault we took the opportunity to call into a garage we believed specialises in Citroen Traction Avants. Célestine's headlight switch is still a mystery to us, so we thought we would ask an expert. The thing that prompted this was seing a the name of a garage in Chatellerault and a phone number on a very nice roof-rack on a TA. It turns out that the garagiste isn't a TA specialist, but the man with the roof-rack is a good friend. He directed us to the friend's shop which is the large Depot Vente (second hand) shop in town. He was most interested, and invited us to attend a swap meet at the motor museum Valencay on Sunday. What could we say but "yes"? 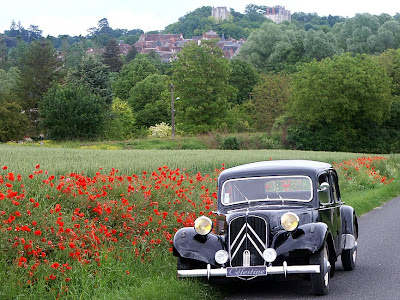 Tomorrow evening we are off to Paulmy to see Shanna Waterstown at the Bar de l'Union, so this weekend will be an interesting one. In between excitements, there is plaster and floor to sand in the guest bedroom and cherry jam to make.

I'd describe the weather right now as downright summery.

It's funny — the Bricomarché here in Saint-Aignan is a much nicer and bigger store than the Mr. Bricolage.

An unusual view of Preuilly-sur-Claise.

Is Célestine chatting with les coquelicots?